In twelve albums over twenty years, Roy Zimmerman has brought the sting of satire to the struggle for Peace and Social Justice.  His songs have been heard on HBO and Showtime. He has recorded for Warner/Reprise Records.  He’s been profiled on NPR’s “All Things Considered,” and he's a featured blogger for the Huffington Post.  Roy’s YouTube videos have garnered over six million views.  In this election year, Zimmerman has made a “campaign promise” to perform in all fifty states before the Republican National Convention.

All his shows in cities across the country are called “Live From the Starving Ear,”  Zimmerman’s homage to San Francisco’s legendary nightclub the hungry i. The Occupy Movement, the Tea Party, same-sex marriage, Socialism, Creationism, guns, taxes, abstinence and yes, presidential politics all come under tuneful scrutiny.  “There’s a whole new political landscape,” he says, “painted by Jackson Pollock.” 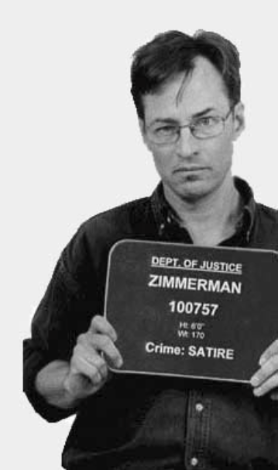