> Events in Montana > Stephanie Davis Band comes to the Buckhorn!

Cowboy Family Dance that is sure to be a barn burner!
The Buckhorn Theatre
Feb 19, 2012 at 8:00 PM (MST)
Livingston, Montana
Selected Tickets

On Sunday, February 19, The Stephanie Davis Band will play a Cowboy Dance at The Buckhorn Theatre in Livingston.  The dance will begin at 8:00 pm, with doors open at 7:30.  Admission will be $17 advance, $20 at the door, kids 12 and under free.  Advance tickets can be purchased at www.ticketriver.com, or by calling 222-9600.

To cowboy and western music fans, Stephanie Davis needs little introduction. She frequently appears at the Western Folklife Center's National Cowboy Poetry Gathering and other gatherings and events across the West, and has been heard many times on Garrison Keillor's A Prairie Home Companion. Country music superstar Garth Brooks has recorded many of her songs, (her first official cut as a songwriter was the song “Wolves”, recorded by Garth Brooks on his No Fences release - Brooks also recorded “The Gift”, “Learning to Live Again”, and “We Shall Be Free”), as have Don Edwards, Trisha Yearwood, Maria Muldaur, Joey and Rory, Roger Whittaker, Daniel O'Donnell, Martina McBride, Sam Moore and many others. She's recorded a number of albums, including six CD releases on her own Recluse Records label.

She was at the special National Memorial "Dream Concert" at Radio City Music Hall in New York in September, 2007, to benefit the Martin Luther King, Jr. National Memorial in Washington, DC. Garth Brooks sang "We Shall be Free," the chart-topping song he and Stephanie co-wrote, and other participants at the event included Stevie Wonder, Jessye Norman, Aretha Franklin, and many distinguished guests. She toured with Garth Brooks in November, 2007.

On October 31, 2007, George Cole's RealTime program on Yellowstone Public Radio aired a one-hour special, "A Visit With Stephanie Davis," recorded at her Montana ranch. You can listen to the archived program at the show's web site.  And, you can hear the Stephanie Davis Band live in Bozeman and Livingston February 18th and 19th .  Don't miss this rare chance to hear one of country music's finest songwriters in person!

Don't miss this rare chance to hear one of country music's finest songwriters in person!

This dance & show is one of many perpetual fundraisers for a new non-profit  operating group, Friends of the Buckhorn, to open, expand and maintain the programs at the Buckhorn Theatre. The Park County Community Foundation is proudly acting as the fiscal agent for the group. If interested in becoming involved, make a donation or to rent the theatre for your event please call John Payne 406.222.9600 for more information or email info@buckhorntheatre.com. 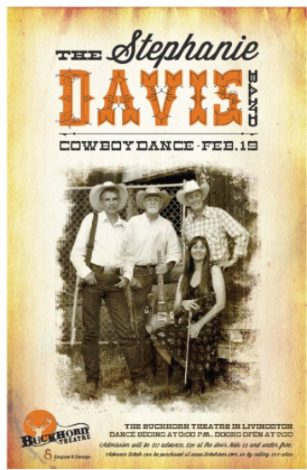