Coexist? The Question of (In)tolerance

A limited number of printed tickets will continue to be distributed on the library bridge on Clemson's campus Thursday, March 1 from 10am-2pm and again next Tues-Thurs, March 6-8, from 10am-2pm while supplies last.

Tickets are now available online for 2 overflow venues in Clemson, 1 on campus and 1 off campus.  The on campus venue will be announced soon, and the off campus venue is Clemson Presbyterian Church located at 346 Old Greenville Hwy, Clemson, SC.

The event will also be shown via live webcast at www.coexistclemson.com.

We invite you to join us at one of our local overflow venues. You can pick up tickets for either the on campus or off campus overflow venue tonight.

Is it arrogant to claim that your beliefs trump everyone else’s?  “Intolerance” is now a major accusation, particularly against men and women whose beliefs leave anyone feeling left out in any way, shape, or form. Is it even possible to include everyone when it comes to your beliefs?  Could tolerance itself be a form of intolerance?

Come armed with your own questions as two world-class speakers confront the challenging topic of intolerance.

Ravi Zacharias will speak for about 45 minutes to be followed by a live moderated audience question and answer session with Ravi and John Njoroge.  Microphones will be in the audience.  You will also be able to text your questions.

Dr. Ravi Zacharias was born in India in 1946 and immigrated to Canada with his family 20 years later. Well-versed in the disciplines of comparative religions, cults and philosophy, for 36 years, Zacharias has spoken all over the world and in numerous universities, notably Harvard, Princeton and Oxford University.

In his latest book, Why Jesus? (FaithWords/Hachette Book Group, January 2012), Zacharias examines the inherent hunger for spirituality experienced by all human beings, the ways Americans are satisfying this hunger with beliefs other than Christianity and makes the case for why Jesus must be at the root of these differing worldviews.

Zacharias has authored or edited more than twenty books, including Walking from East to West, The Grand Weaver, Beyond Opinion, The End of Reason: A Response to the New Atheists and Has Christianity Failed You. Several of his books have been translated into Russian, Chinese, Korean, Thai, Spanish and other languages.

His weekly radio program, Let My People Think, is aired on more than 1,700 outlets worldwide and his weekday program, Just Thinking, on more than 400. He is the founder, chairman and CEO of Ravi Zacharias International Ministries, headquartered in Atlanta, with additional offices in Canada, India, Singapore, the United Kingdom, the United Arab Emirates and Hong Kong.

John is a member of the speaking team at Ravi Zacharias International Ministries in Atlanta, Georgia. In addition to serving on church staffs in both Kenya and in the U.S., he has organized and led leadership training conferences and raised funds for various relief projects.

John is an ordained minister who speaks frequently in churches, conferences, and universities around the world. His passion is to help clear the fog between the academy and the local church by making the case for the credibility of the gospel of Jesus Christ in a winsome and persuasive manner.

He is a graduate of Philadelphia Biblical University and Talbot School of Theology where he majored in philosophy, New Testament studies, and theology. While at Talbot, he also served as a graduate teaching assistant and an adjunct faculty member. He lives in Atlanta with his wife, Leah, and their two boys, Jonathan and Benjamin. 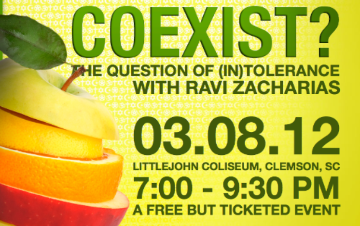