Rajamani brings his "Moonlight Tanz" concert series to the intimate Carver Theatre every year featuring different music and dance traditions.  This year he takes his audience on a musical trip to the Eastern Eurasian regions including Russia, Ukraine, Romania.  Just south of this region is the Zororastrian culture of ancient Iran and the far eastern stretches of the Islamic culture of Tajikistan, Usbekistan, Afghanistan, Pakistan melding into India and its Hindu culture.  These regions have shared history through the ancient and modern times, specifically during the Soviet period when many of these regions were either a part of Soviet rule or were conquered by Soviets or had friendly ties with the Soviet Regime.
The concert showcases Rajamani's compositions written for ballet blending exotic Indian, Middle Eastern with Wester Classical.

Rajamani's facination with Eastern European cultures comes from his childhood listening to folktales read to him by his grandmother. In recent years he has collaborated with top Russian musicians specially Russian Gypsy artists.

Slavin Nadal Ballet
&
school
With roots in Russian-based technique, the Slavin Nadal School of Ballet Curriculum is designed for the serious dance student desiring a high level of mastery. It reflects the values and vision of its founders -  refined training, sound technique, artistry, discipline and deep appreciation for the art of classical ballet.
School Founders Eugene Slavin and Alexandra Nadal were former Principal Dancers of the Ballet Russe de Monte Carlo and the Royal Winnipeg Ballet. Prior to opening the Slavin Nadal School of Ballet in 1989, they were the founding Artistic Directors of Ballet Austin, Directors of the Ballet Austin Academy, and Artistic Directors of the company's predecessor - Austin Civic Ballet.
School Directors Joseph and Kimberly Nygren Cox are both artists with long and diverse careers in dance. In addition to their many years of performing professionally, they have had their choreography presented in numerous venues and are both recipients of the Al Smith Individual Artist Fellowship Award for Choreography from the Kentucky Arts Council.
Sergey Vashchenko
Sergey Vashchenko began his musical training as a child on the bayan and balalaika
in his native Ukraine.
He has toured throughout Europe, now touring with his group "Kalinka".  He released his debut recording cd "Concerto for Balalaika with Symphony Orchestra", by R. Makarenko at the Perm Radio Station in Russia in 1988.
Mr. Vashchenko has also been the conductor and musical director for shows at Rice University of Houston, from 1998 to 2003, for the orchestra affiliated with the Balalaika-Domra Association of America as well as serving as musical instructor and Dean for Balalaika at the Perm Cultural Institute for Arts. 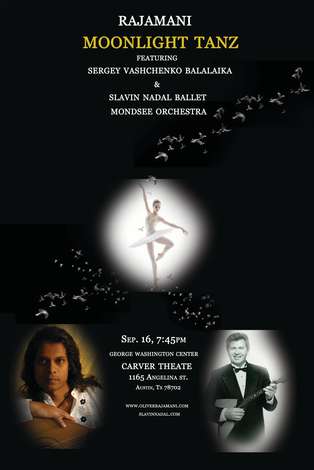