The JEREMIAHS in Concert - Worcester, MA

Coolbawn Road Productions is very pleased to announce a very special concert featuring the Irish band The Jeremiahs making their first Worcester appearance. The concert will take place at the Hibernian Cultural Centre, 19 Temple Street in Worcester at 8:00 p.m. on Friday, July 7, 2017.

Described by Séan Laffey of Irish Music Magazine as "One of the freshest bands in Irish traditional music" this Dublin based band combine traditional and contemporary sounds to create their own brand of Urban Folk music. Since their founding in 2013 they have blazed a trail across Ireland and Europe playing some of the top venues and festivals.

The band features Joe Gibney, chosen by Chicago’s Irish American News as its Male Vocalist of the Year in 2015. With his instantly recognizable timbre, Joe offers a diverse repertoire of songs, from rousing sea shanties to emotional traditional songs of hardship, love and loss. His obvious passion and love for these songs, old and new, is plain to see and hear and will entrance and warm the heart of any music lover. A talented Dublin born singer with a melting pot of influences.

Born in Bordeaux, in France, Jean-Christophe Morel has been playing classical music from the tender age of 4. His love affair with Irish traditional music began after he sat in at a session during his studies at the conservatoire of Bordeaux. A few years later, he went studying Irish traditional music in Dublin for a year where he met the band. He has since completed a Masters in the Conservatoire National Supérieur of Music and Danse of Lyon. His love and interest in all kinds of music and his experience in playing jazz and classical music influenced a lot his playing in Irish traditional music. The original project The Jeremiahs has been a great opportunity to develop his own style of playing and composing.

Dublinese accompanist James Ryan is a recent winner of The Christy Moore Songwriter Showcase. He has amassed a wealth of experience having already performed in over 14 different countries to date. James’ draws on a wide a range of influences from different genres and traditions which is evident is his unique percussive backing style. As well as an established teacher James is also an experienced sound engineer having worked with a long list of talented and well respected musicians and singers in the studio. 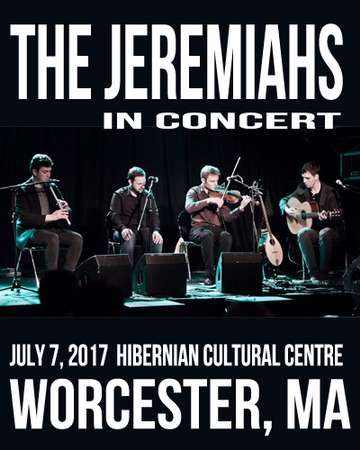