23five + LAND AND SEA are excited to present a night of TOUCH Conference curated by Mike Harding.

Influenced by écriture féminine, alchemical metaphors, and a range of musical traditions ranging from holy mysticism to industrial, Skeen works with recordings, digital presets, voice, and mixed instrumentation. Her performances, publications, and installations focus on the contrast between facing the finite resources of our physical landscapes and their infinite digital representations. She is a MFA candidate at Bard, a member of VOLUME, and has recently released full-length works on Dragon's Eye Recordings, Crystalline Morphologies, and Room40.

A Los Angeles-based violinist and composer interested in perception, the transportive nature of long durations, and trance states. His work explores the contrast between stasis and movement and questions the possibility of depicting both synchronously. In live performance, he builds lush soundscapes via improvisation, representing his immediate experience & the space being performed in. His work draws from a long lineage of artists exploring sustained tones within organic performance, including Tony Conrad, Pauline Oliveros, and La Monte Young. Zachary is represented by Touch Music and currently a participant in Touch's curated mentorship program. His 1st album is released by Touch on 12th April 2019.

Since its first release in 1982, Touch has created audio-visual productions that combine innovation with a level of care and attention that has made it the most enduring of any independent company of its time. 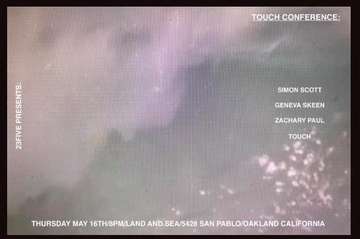