Lúnasa’s Cillian Vallely (uilleann pipes and low whistle) will be in concert with Ryan McGiver (guitar and vocals) and David Doocey (fiddle and concertina) at 8:00 pm on Friday, June 9, 2017 at the Knights of Columbus Hall, Circuit Ave North, Worcester. Proceeds from the concert will be used to benefit Community Radio Station WCUW 91.3 FM and Saturday morning’s Irish program “The Four Green Fields”.

Lúnasa’s Cillian Vallely is quite simply one of Irish music’s most accomplished and sought after musicians. From a talented and influential music family from Armagh he has played and recorded with Bruce Springsteen, Natalie Merchant, Mary Chapin-Carpenter, Tim O’Brien, and Riverdance in addition to recording as a guest on over 50 albums. Folk Radio U.K. had this to say about his first solo release: “[The Raven’s Rock] proves a delicious CD, full of delectable playing from a musician who has no need to prove himself yet effortlessly delivers the goods.”

A native of the northern Catskills, Ryan McGiver, is known on either side of the Atlantic for his unique blend of open string guitar and breathy vocals. He has performed throughout North America, Europe and Asia and his music has been showcased on the BBC, NPR and RTÉ Raidió na Gaeltachta. McGiver has recorded and shared the stage with an eclectic blend of Irish and world folk musicians including Pádraig Rynne, Jesse Smith, Matty Mancuso, Patrick Ourceau, Dana Lynn, Pat Mangan, Vishtèn, Jolie Holland, Shahzad Ismaily and Susan McKeown to name a few.

His debut solo album of ballads ‘Troubled in Mind’ has received international acclaim. fRoots Magazine hails it as: “The Catskills and the West of Ireland blend subtly in his music…and an absorbing and plaintive collection of ballads filtered through a myriad musical influences and sensibilities.”

Worcester-born Mayo man David Doocey holds numerous All-Ireland titles on both fiddle and concertina. He also won the first World Fiddle Championship in 2005 and has achieved success in the much coveted Feile Oriel. His music can be heard on many recordings including Grammy award winners Tim O’Brien and Allison Brown. In the last number of years he has shared the stage with Mike McGoldrick, Tim O’Brien, Dougie MacLean, Martin Hayes, Dermot Byrne, Seán Keane, Sharon Shannon, John Doyle, Lúnasa, the David Munnelly Band and many more.

David has toured throughout Asia, Europe, America, Australia and New Zealand. He also teaches and can be found at the annual Willie Clancy Summer School in Milltown every year in County Clare. He has toured with the international dance shows Ragús, Irish Legends and Irish Dreams and as a member of the band Gráda. He also performs with the Salamanca Ceili Band. His debut CD “Changing Time” has been hailed by Alex Monaghan of The Living Tradition as “an exemplary debut recording…”

Irish music has been a part of WCUW for over four decades. The Four Green Fields airs every Saturday morning from 9 am until noon and features a variety of Irish music. 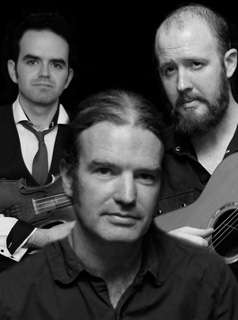