The Four Stage Quad-Facility (Codename: Afterlife), designed to contain such threats, is now our safe haven from the outside infection. Join our Live Parabass Assimilators for a new stream of Sound Wave Trancemissions & Psyence, Progressive Treatment, Breakbeat Theory, In-House Minimal Tech Recovery, Dub-Cycle Therapy, and D.N.B. Research, as we will find the cure!

Before Containment from the last Event the Radio/Active Presence has spawned a new breed of Mutated Virus, and we will throw in everything from our arsenal to overcome this new Infection... Brief yourself on the new Mission Details and prepare to be QUARANTINED."

TWIN SHAPE - Live ??????, ?? Funk Lab Records | Kick It Recordings | UFO | NODAT Agency www.soundcloud.com/twinshape Twin Shape is a Live project centered around Downtempo and Trip-Hop, but within you will find a blend of elements borrowed from genres such as: Glitch, Dub, DnB, and Psy. The feel ranges between bright and melodic, dark and mysterious, to lush and atmospheric. The sound is constantly evolving and will keep you guessing without disappointment. Choosing to let the music speak for itself, Twin Shape performs live from behind a mask that can change from show to show, pulling listeners into an audio/visual journey of his creation. GIAN CARLO - Live New Orleans, LA Pharmacy Music | Funk Lab Records | NODAT Agency soundcloud.com/gian-carlo

At an early age Gian Carlo grew up in a eclectic lifestyle absorbing various cultures giving him a diverse background in music. Known for his lush but driving progressive sound, Gian has been pushing the tougher side of Progressive and Tech house to the techier sounds of Trance from top producers internationally. The formula for his productions is a fusion of techy, dark, tribal, and melodic using hard driving bass lines and complex beat patterns ranging from hypnotic, energizing, and dynamic all at the same time.

The Funk Lab dropped their first vinyl ep release in the fall of 1997. Through 95 and 96, they had begun to define their sound, fusing elements of funky breaks, and electro, calling it Funk Lab. With a diverse back catalog ranging from straight Florida style funky breaks to the darker, moodier electro, The Funk Lab has engaged a variety of listeners from both the US and abroad. BURUFUNK - Live Dallas, TX Shiznit Recordings | Armada Music | Journees Music In the world of electronic dance music Burufunk is one of the few artists who breaks boundaries and set new standards for the industry. Burufunk's style is one that is hard to categorize the best definition could be progressive, with a world of intricate abstract soundscapes that are almost other worldly.

Through a use of harmonious melodies and earth shaking beats Burufunk creates a unique style and sound that cannot be matched. His latest productions are some of his best works yet as he masters the art of production with original mind blowing creativity... Sideshow Mob Unkle John MxMind Maxx Heth Bon Spengler Stage Three: House / Minimal / Techno (Inside Main) TIARI - Live Detroit, MI Machine Box | Der Hut | Frucht | Digress www.soundcloud.com/tiari Tiari (A.K.A Trevor Caruso) tells a vicious story with his moody selections and dance tracks that give you no choice but to move your body to the rhythm. Born in metro Detroit he was heavily influenced by electronic music his entire life. At the age of 6 he learned breakdancing from the combined influence of his mother and older brother who was a big fan of hip-hop music. He has always been a fan of underground and punk culture which has led him to develop a deep dark minimal sound that has played out across the backdrop of a city that tells a similar story. POINTBENDER - Live Austin, TX Thoughtless | Musical Missionary | Harmonious Discord www.soundcloud.com/pointbender

After many successful live performances the pieces began to gain a momentum of their own and were later released as projects on labels like Thoughtless, Musical Missionary, and Harmonious Discord. JAMES KELLEY - Live Dallas, TX www.soundcloud.com/james-kelley Hailing from somewhere deep in the shadows of the Dallas underground this veteran artist, with over a decade of existance in the scene, is no stranger to orchestrating dancefloors into a late night mental mind f*&k. Influenced by dank dark warehouses and all night marathons, his weapons of choice span several genres including minimal, tech house and techno. He is constantly locked in the lab formulating a unique brew of sounds ranging from deep, dark and moody to twisted and diabolic so prepare yourself to get lost in an audio journey into the depths of your own mind.

An Omega set will always include many original tunes, remixes, edits, and mashes, with a heavy emphasis on live improvisation and manipulation. His energy and stage presence, combined with his monster tunes, inevitably whip a crowd into a frenzy of bassed out bliss. He has shared the stage with: EOTO, Liquid Stranger, Vaski, Eskmo, The Malah, Cold Blank, Bird of Prey, Trillbass, Roksonix, Virus Syndicate, NiT GriT, Calvertron, and many more. Travis Elliott AQ Langa Aries3 Dragonman Soy_Capaz Mission Details: You know the drill!

Come dressed to fit the theme and get lost in the plot! Fully FUNKtional has brought together some of the best Sound, Lighting, Deco, Visual, and Laser Crews in Texas to build a Fully Themed and Completely Immersive Environment for you to explore. Lab Coats, Military Garb, Hazmat Suits, or Quarantine Victim Costumes are just a few ideas. Be creative and have fun. CASH prizes throughout the night for most creative attire. 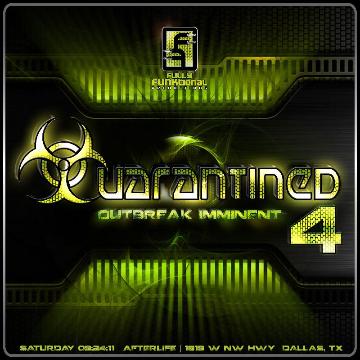