Acclaimed as "one of the great contemporary folk voices of Ireland," and "a stellar guitarist," Tommy O'Sullivan, has remained one of the hidden treasures of traditional Irish music for many years. He has toured throughout North America and Europe, appearing at many major venues and festivals. Tommy has always kept an active recording schedule having recorded three albums as a member of Sliabh Notes and a duet album with Bothy Band piper, Paddy Keenan as well as two solo albums.

Saundra O'Sullivan is from Houston, Texas with Native American roots. During high school she sang in many choirs and was a featured soloist. During her nursing career, she continued a high interest in music. Saundra and Tommy’s paths crossed when she attended an annual Irish music retreat in Midlothian, Texas in 2007.

Saundra rekindled her love for singing once she moved to Dingle, Ireland and was submerged into the well of the traditional Irish music scene that is so much a part of the Dingle landscape. As they explored singing together they discovered her alto harmonies to be a perfect match for his tenor lead vocals, adding a fertile texture to the overall sound. She has now become a very welcomed addition to the vibrant local music scene in Dingle, Ireland, where Saundra and Tommy now live since their wedding in Houston in March 2010.

Tickets can be obtained on line at www.coolbawnroadconcerts.com and at Fiddlers Green.
Contact Event Organizer 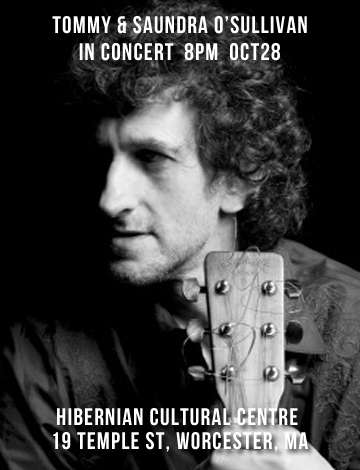