> Events in New York > My Mothers Italian, My Fathers Jewish, and I'm in Therapy

My Mothers Italian, My Fathers Jewish, and I'm in Therapy

Steve Solomon’s two-time award winning show has met with rave reviews and great audience acclaim throughout the   country, becoming one of the longest-running one-man shows in Broadway history. Once again, we meet the people that we’re all too familiar with -- the family members that make you remember why you left home in the first place. It’s a laugh-filled fest of everybody you know, have known, and some you’d want to forget but can’t, all brought to life on stage by the comic magic of Steve Solomon. Described as “One part lasagna, one part kreplach, and two parts Prozac,” you don’t have to be Jewish or Italian to love this show. All you need is to know what it feels like to leave a family dinner with      heartburn and a headache! My Mother’s Italian, My Father’s Jewish and I’m In Therapy ran for two years in New York City, has toured internationally to more than 200 cities and has sold more than 750,000 tickets so far. “Amazing! Hysterical! A wonderful show! I still hurt from laughing!” – Broadway World.com 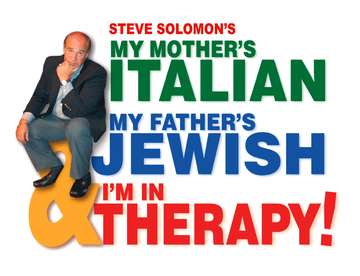