Dark Play or Stories of Boys

Nick revels in pretending to be someone else but when things get serious will he be able to keep up?
Unitarian Universalists of Fallston
Fallston, Maryland
Selected Tickets

Dark Play or Stories for Boys


Nick first leans about "Dark Plays" in his high school drama class, a dangerous game where some players know the rules and the others don't know it's a game.  He decides to take this idea to the internet, fooling people in chatrooms into believing he is someone else.  When he decides to take one of his games to the next level and make Adam fall in love with “Rachel”—the perfect girl that Nick invented—he realizes that the bigger the lie, the deeper you must go. Can Nick keep up with his lies or will he have to face the consequences of his dark game?

Online sales will stop at 7:30 pm the night of each performance.  Credit cards will be accepted at the door with a surcharge of $0.50 per ticket added to the transaction. 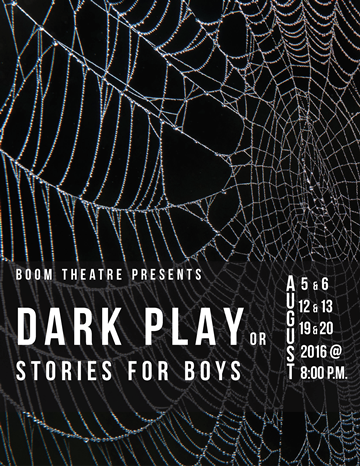