The Stage Play on the best selling book The Pink Elephant in the Middle of the GETTO
LBJ Performing Arts Center
Jun 04, 2016 at 6:00 PM (CDT)
Austin, Texas
Selected Tickets

After packing the house twice at the Harker Heights ECenter and at the LBJ Performing Arts Center on May 7th in Austin, Texas, by popular demand, we are going to run it back once again with another outstanding performance before traveling to our next city.
The play is written and directed by the  Author of The Pink Elephant in the Middle of the GETTO TiTi Ladette, who also wrote the songs for the play as well.
The Pink Elephant in the Middle of the GETTO is a stage play based on the best selling memoir that is more than a story. It is the real life journey of Trina "TiTi Ladette" Cleveland-a journey filled with hurt, pain, drugs, mental illness, verbal, physical and sexual abuse.It is an upclose look at the impact our words and actions have on others. It uncovers what most never want exposed. It sheds light on those living their lives in darkness. And, it gives anyone with a loved one living in darkness a different perspective. Despite her trials and tribulations, TiTi has managed to make a positive difference in her life, and in the lives of others.Just as the book, The Pink Elephant in the Middle of the GETTO this stage play will not only make you feel a full array of feelings-it will inspire you to do more and be more in your personal life and in your community.
The cast is an awesome lineup of actors and singers including several original favorites such as:  Kristal Joiner, Glyn Holiday Walker, Jervonda Westbrook, and Kendria Westbrook-Duncan. We are also welcoming Acting Bad Production's Curtis Von and Nomad Production's E'tian Larue as part of the production team and the acting team along with several other amazing local actors such as Rebekka Pearl Bryant and Nakisha Harris!
Contact Event Organizer 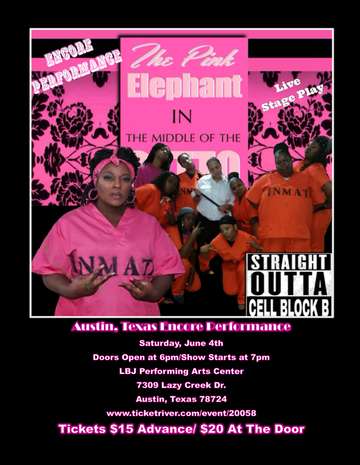