NEAM Speaker Series - “CARS OF THE PAST – STORIED INDEPENDENT AUTOMAKERS”

The New England Auto Museum announced the formation of a Winter Speakers Series to take place at Dragone Classic Gallery & Showroom in Westport featuring well-known automotive writers and experts. Sessions begins at 11AM and a light luncheon will be provided.
On February 27th, 2016 NEAM will host Patrick Foster. One of America’s best-known automotive writers is historian/author Patrick Foster – a dedicated researcher who has spent more than 30 years studying various aspects of the automotive industry, has also been writing for automotive magazines for well over a decade. He has appeared on several radio and television talk shows and also the documentary “Women and the Automobile”, produced for television, in which Foster explained the significance of the Nash Metropolitan, a car designed primarily for women.
Pat has written numerous books on almost all the independent U.S. automakers that have disappeared from the scene including Packard, Studebaker, American Motors and many others. Pat is a feature writer and columnist for Hemmings Classic Car magazine, writes for Automobile Quarterly and Collectible Automobile, and has a column in Old Cars Weekly.

Each Speakers Series event will include a technical session hosted by restoration expert and historian George Dragone focusing a one aspect of classic car preservation and maintenance. Tickets for each event will be $15 per person and can be purchased here or at the door.
Contact Event Organizer 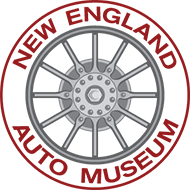