The City of Forest Hill Civic & Convention Center in cooperation with the Fort Worth Metropolitan Black Chamber of Commerce Film Institute is proud to welcome back King and Brown Enterprises, Poorchild Films, Reda Jo and Higher Heights Filmworks, and Mutual Interests of Austin for the Tarrant County release of the inspirational film, “A Man Called Jon.”  The film will be shown Saturday, January 9th   at the Center, located at 6901 Wichita Street in Forest Hill.  Doors open at 4:00 p.m. with the screening starting at 5:00 p.m.

“We are excited to welcome back to Forest Hill this highly successful production team and its new film,” said Mayor Gerald Joubert.  This is the second movie screening to be held at the Center.   Award-winning director M. Legend Brown shot the film for ten days in the city of Terrell, Texas, his hometown. “This story is a spiritual journey about   a man who’s trying to find out where he fits with his unusual style of praise, while trying to honor God and not embarrass his family.”

King and Brown secured casting with two of Hollywood’s legendary actresses to make “A Man Called Jon.” Dallas native Ms. Irma P. Hall, portrays church mother Sadie Johnson, who is full of wisdom, advice, and a stern hand when need be; and Fresh Prince of Bel-Air’s cast member Vernee Watson, portrays Helen Black, the quick-witted church secretary. Brown steps out of the traditional machine of casting name talent in the lead roles. “We find it easier for the audience to fall in love with the character if they are unknown and they don’t have any baggage from other films” says Brown. Christian Heep embodies the role of Jon Terrell Carson and Sharice Henry Chasi brings a warmth and charm to the character of Robyn Harris.

“A Man Called Jon” was released on October 25, 2015 by the production companies in order to build momentum for distribution through church screenings, local premieres and film festivals. For more information about the film, go to www.amancalledjon.  To watch the trailer, go to https://www.youtube.com/watch?v=7DfTFw6Iymk.

Tickets for the Tarrant County screening are $10 in advance; $15 at the door.  They can be purchased online at https://www.ticketriver.com/event/18101.  Or, call 310-728-9951.  Proceeds benefit the Fort Worth Metropolitan Black Chamber of Commerce Film Institute held annually at the Forest Hill Civic & Convention Center. 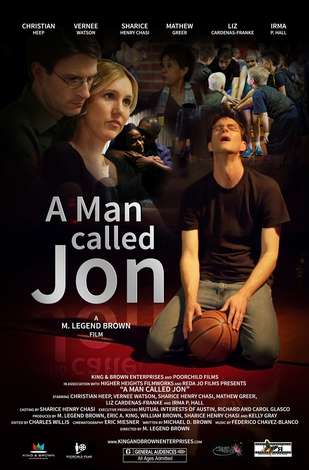