NEW YEAR'S EVE 2017 AT 49 GROVE
NEW YORK'S # 1 RATED LOUNGE BY CITYSEARCH & TOP CHOICE MAGAZINE
NEW YORK NEWSDAY TOP NYE VENUE
NEW YORK POST TOP 10 VENUES
Open 8pm-4am
Longest Open Bar In NYC for NYE
More Ticket Options Than Any Other Venue
49 Grove is one of New York's hottest upscale lounges and has been voted by Citysearch and Top Choice Magazine as being the Best Lounge in New York City time and time again.Conveniently situated between Grove Street and 7th Avenue off 7th Avenue, in the heart of the West Village, 49 Grove is known for an elegance and style that goes unmatched anywhere else, making it the perfect spot ring in the New Year.With four rooms of the most sophisticated and extravagant décor, 49 Grove's immaculate setting is the epitome of splendor and class. Limos, bottle service, and personal security are only a few of the many luxuries 49 Grove has to offer, along with a fantastic staff that is there to pamper all those who enter their doors. It's intimate ambiance caters to anyone wishing to celebrate the New Year with a bit of finesse and style.
Our annual New Year's Ball will include premium top shelf open bar, passed hors d'oeurves, breakfast buffet, champagne toast at midnight and 6 Guest DJ's playing a mix of House, Dance, Disco, 80's, Rock and Hip Hop.Tickets for the 49 Grove New Year's Eve party are being sold now, so be sure to purchase them early to ensure an unforgettable New Year's Eve experience at one of New York City's hottest venues!
20% Bottle Gratuity, New York State Tax and $5 Coat Check are mandatory and are not included in table ticket purchase price.Very Limited Seating
WHAT THE PRESS LIKES TO SAY ABOUT US
CitySearch“Best Lounge in New York”
Top Choice Magazine“Best Lounge in New York-Award Of Excellence”
Time Out New York"Taking the decadence of bottle service to the next level…"
Shecky's"Big spenders will dig the subterranean upscale lounge…."
Gotham"… impressive, fresh high-end…"
UnCin"49 Grove is a elagant lounge, the stylish kind that all of us grownups have been craving downtown. The place appeals to a sophisticated crowed seeking service, intimacy, comfort and style."
Social Life"An upscale lounge … fusing service, intimacy, comfort and style, reminiscent of yesterday catering to a sophisticated crowed."
In New York" 49 Grove's candlelit staircase leads to an intimate oasis with signature 49 Grove cocktails."
Razor"Enter 49 Grove, what is about to become Manhattan's hottest lounge. Opened in late October by "it guy" Aram Sabet (of the Hampton's restaurant Pacific East), 49 Grove has already caught the valuable attention of trust-fund babies and high-profile personalities. Why? Because this four room mecca is designed to pamper, with on-site personal security, limos and bottle service at your beck and call - along with some of the city's best food and European music."
Time Out New York"Aram Sabet, the owner of West Village nightspot 49 Grove, offers the usual bottle-service spread...But doesn't blink when asked to procure cigarettes, pizza, McDonald's meals, Chinese food, ice creams, burgers, eye drops, tampons, or reservations at hotels and restaurants in New York, Miami and Vegas…… Sabet paid for a stretch limo to bring me to his club - he uses a company called Billionaire Travel Services - and politely removed a gaggle of gals from a bottle service area so I could experience the dual thrill of ousting plebes from a private section and then looking out at a crowd that no doubt wondered who the hell I was."
Metro"Painfully hip New Yorkers take note: Word on the street is that Aram Sabet's 49 Grove will be the new hotspot to score a spot on the guest list. The swank West Village lounge features luxe bonuses such as on –call fleet of Maybachs, S-500 Mercedes and Range Rovers; a parked "smoking limo," where puffers can enjoy their cancer sticks in warmth and comfort; and a menu that has everything from mini Kobe burgers to Petrossian."
For Tickets Or To RSVP: (212) 727-1100Oraramsabet@aol.com
www.49grovenyc.com
For Tickets Or INFO: (212) 727-1100Oraramsabet@aol.com
Contact Event Organizer 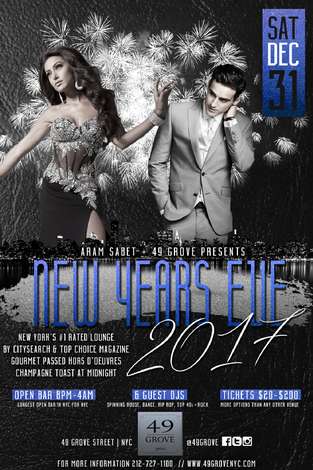