Jason Eady - Live at the Buckhorn

The Buckhorn, along with VI Productions, are proud to announce Jason Eady on Friday, October 2 at The Buckhorn in Livingston at 7PM with special guests, Jason Wickens and the North 40.

Jason Eady
Jason Eady is an American country music singer and guitarist. He is regarded as an important figure in the subgenre of Texas country music, a form of "classic country" bent upon returning the music to its historic singer-songwriter roots.

Jason Wickens and the North 40
Jason Wickens grew up on his family's ranch in rural North-Central Montana where he taught himself to sing and play guitar. At an early age he was introduced to Texas based artists like Bruce Robison, Walt Wilkins and Jason Boland that inspired him to write music and tell stories in a way that felt truly authentic to him. Most recently Jason has teamed up with an all-star cast of Bozeman, MT musicians that make up his band, the north 40. Jason Wickens and the North 40 together create an eclectic mix of country, rock and folk music best described as Western Americana. 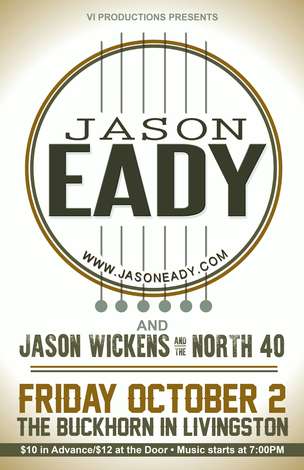