Combat Night comes back to Orlando for our 53rd show and the last one in town for the year. Come out and support your local MMA fighters as they step into the cage and look to take home a win. We have fighters from multiples schools in the area, including, Breaking Point MMA, American Top Team, Tough As Nails MMA, American Combat Club, The Jungle, Team Gladiator, and Gracie Barra.

As an added bonus everyone that buys a ticket to the event will be entered to win 2 FREE tickets to the UFC event coming to Orlando on December 19th! We will do the drawing during the event and award the tickets. 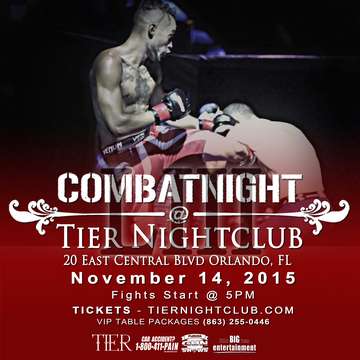