Movie Screening of WINNING - The Racing Life of Paul Newman

We're very excited for the screening of WINNING: The Racing Life of Paul Newman on October 28th at the Stepping Stones Museum Multimedia Gallery.

WINNING chronicles the 35 year racing career of Paul Newman, as both a prolific driver and owner.

The world knows Paul Newman one of the most prolific and revered actors in American Cinema. Yet few know the gasoline-fueled passion that became so important in this complex, multifaceted man. His racing career which spanned thirty-five years nearly sidelined his acting career. Newman won one Oscar as an actor, but amassed four national championships as a driver and eight championships as a team owner. Paul never stopped racing, winning his last race at the age of 82. 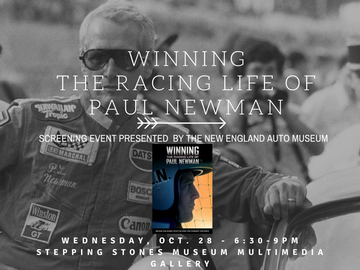