World renowned Italian tenor, Pasquale Esposito, accompanied by his band of acclaimed international musicians, returns for his 7th Annual Holiday Benefit Concert: SEASON OF HOPE. The concert will feature Holiday songs, Italian, Spanish and American standards and opera. This year's concert will benefit the San Jose non-profit, HOPE SERVICES. Their mission is to improve the quality of life for people with development disabilities. For more information, visit www.hopeservices.org.

Pasquale Esposito, a native of Naples, Italy, immigrated to the United States in 1998. Aside from recording and touring, Pasquale made his successful debut at San Francisco Opera in June 2015 receiving rave reviews for his portrayal of Ragazzo del Popolo in the world premiere of Marco Tutino’s Two Women (La Ciociara). The New York Times stated that he sang with "airy charm" and The San Francisco Chronicle described Esposito as a "charismatic and dulcet-toned" singer that delivered a "splendid account."

In Spring 2015, Pasquale successfully premiered his 1st PBS Special: Pasquale Esposito Celebrates Enrico Caruso. The docu-concert pays homage to the legendary tenor Enrico Caruso, by taking the audience on a musical journey through the places and cities that shaped his career and legacy and made him an international star.  The program in just 6 months has covered over 180,000,000 households and has raised over $500,000 for PBS stations nationally. The program will continue to be aired throughout the US thru 2017. 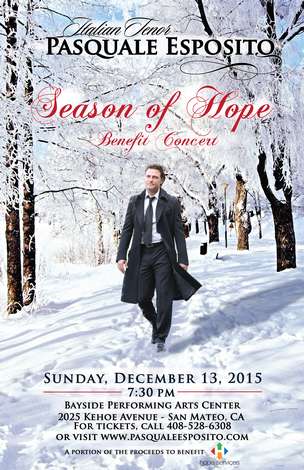