Red Dirt at the Red Door

ONLINE TICKET SALES HAVE ENDED BUT WILL STILL BE AVAILABLE AT THE RED DOOR TODAY OR AT THE GATE THIS EVENING.

Cody Canada & the Departed, Reckless Kelly, Micky and the Motorcars at the Red Door

The Red Door Lounge, along with VI Productions, are proud to announce Cody Canada & the Departed, Reckless Kelly and Micky and the Motorcars together on Saturday, August 1 to the Red Door Lounge in Billings at 6PM.

As the frontman of Cross Canadian Ragweed, Cody Canada spent years swirling Southern rock, Dustbowl country and roadhouse roots music into songs that celebrated the ups and downs of life in middle America. He was the poster boy for the Red Dirt movement, a proud outsider who could camp out in the upper reaches of the country charts — and sell more than a million copies of the band's albums, to boot — without playing by the rules of the Nashville machine.

Now, five years after Cross Canadian Ragweed's final gig, Canada is back with a particularly Ragweed-ish album from his new band, the Departed. The result is HippieLovePunk, an album, released in January 2015, whose title reflects the three basic ingredients of Canada's songwriting catalog these days: tunes about getting along, getting it on and getting mad at whoever's trying to back you into a corner.

The Braun brothers – Willy, Cody, Micky and Gary – have been making records with their respective bands for over a decade, singing a lot about life on the road, heartaches and relationships. Reckless Kelly – singer Willy and fiddle/mandolin player Cody’s band – have been putting out records for over 15 years, attracting fans with songs like, “Wicked Twisted Road,” “Ragged As The Road” and “A Guy Like Me.”

Younger brothers Micky, lead singer, and Gary, rhythm guitar, for Micky and The Motorcars, have also earned a solid fan base through constant touring and an equally number of great songs about the rocky relationships and the road such as, “Naive,” “Long Enough To Leave,” “Any Longer Any More,” and “Grow Old.”

Micky and the Motorcars have found their own success after stepping out of their older brother’s shadows and are currently touring behind the 2014 release of their 6th album, Hearts from Above.

Known for their explosive live shows and a passion for making albums of substance, Canada along with old friends, the Braun Brothers, will deliver a show not soon to be forgot.

Tickets are available at The Red Door, online at www.ticketriver.com, and at the door. Show is 21+. 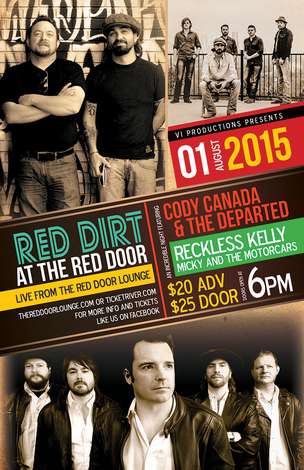