STEVE EARLE AND THE DUKES with the Mastersons

Vootie Productions welcomes Steve Earle and the Dukes with special guests The Mastersons to Bozeman's Emerson Center on Wednesday, September 2nd at 8PM.

Earle is touring in support of his latest release Terraplane. Tickets are on sale now at Cactus Records and online at www.vootie.com.

Almost twenty years ago, Steve Earle and I took a ride through South Nashville. It was down those mean streets that Steve had spent his famous “hiatus” in the early 1990’s mostly shooting dope. It was a crazy, unprecedented thing. Here was a guy – the supposed “new face” of outlaw country – who had already put out a near unbroken string of instant classics, including chart hits like “Guitar Town,” “Someday,” and the immortal “Copperhead Road.” And he just up and disappears, drops from sight for four years, making no records, playing no shows. Many thought he was dead.

By the time we met, Steve was on the way back, through his sixty-day stint in the Davidson County Jail, firmly in recovery. He’d already released a couple new discs, the masterly acoustic Train A Comin’ and the defiantly electric I Feel Alright. But you could tell, he wasn’t all the way back. Clean and sober can be a transitory thing, the ghosts of the old days are far from fully vanquished, if they ever will be. Steve wasn’t sure he wanted any more of South Nashville, but being Steve, which is to be an adventurer and a sport, he agreed to take the tour.

“This is Lewis Street,” Steve said as we turned right off Fain. The neighborhood hadn’t changed all that much since Steve holed up there, listening to Dr. Dre’s The Chronic on a near permanent loop. A number of local denizens were killing time on the corner, craning their heads to see if these particular white boys were buyers or cops. But I was already familiar with Lewis Street from the tune “South Nashville Blues,” which appears on I Feel Alright.

“The Devil lives on Lewis Street, I swear, I seen him rocking in his rocking chair,” the song goes, prefaced by one of the hundred or so all-time great Steve Earle lines, “I took my pistol and a hundred dollar bill, I had everything I needed to get me killed.” A bit of old-timey shuffle, “South Nashville Blues” was very definitely a blues song. This was a little unusual, Steve told me back in 1996. “Because I don’t play a lot of blues tunes. I don’t think I’m really that good at them.”

This is a perhaps not so roundabout way to getting to Steve Earle’s newest collection of songs, the sixteenth studio album of his singular career. It is called Terraplane, and as those familiar with the Robert Johnson song should know, it is very much a blues album, a very good, typically heartfelt blues album.

“I’ve gotten a lot better at playing blues since then,” Steve told me the other day, as we sat in the Greenwich Village apartment where he’s lived for the past several years since moving to New York. He had to get better, Steve said, because if you grew up in Texas during the 1960’s and 70’s playing blues is a serious matter. The bar, Steve said, “is very high.”

It is always fun to sit around and talk about music with Steve Earle. You may need a crowbar to get a word in edgewise once SE gets rolling, but he does tend to say some interesting stuff. In this case he explained that, as far as he knew from his own travels and such compatriots as his great inspiration Townes Van Zandt, Guy Clark, and 1,000 bar room pickers, there were two epicenters of Texas blues in the pre-Led Zep days.

“There was Fort Worth where the model was Freddy King, and there was the Houston scene which was dominated by Lightnin’ Hopkins. Two very different styles,” Steve reported. Steve saw both of these giants, but mostly received their message as channeled through the soul of some of the most formidable synthesizers in pop history. “Johnny Winter, Jimmy and Stevie Vaughn, Canned Heat. Billy Gibbons. Billy fucking Gibbons. He’s a monster, always was. He’d do Lightnin’ but really loud.” Steve said. “These were people we heard at that time and there was no doubt it was the real thing – you can never tell me Bob Hite was not a bluesman.”

This was all well and good, especially since Steve’s guitar player, Chris Masterson, raised on that same Texas soil, can really kick the shit out of the stuff. But the question was, why now? Why was Steve making a blues record now?

Steve twirled at the fringes of his beard. He got that sort of cramped accusative tone and asked, “you saying I made a blues record because I’m getting divorced?”

“Well, that’s what everyone is going to think.”
Steve’s voice rose. “I know that’s what they’ll think! And they won’t be wrong...but it is a little more

This was, of course quite true. When you’ve been married seven different times to six different women, that’s some Chinese math right there. The odd thing is that out of the dozens of tremendous tunes Steve Earle has written over the past 35 years very few have been break-up songs. Asked about it, Steve couldn’t even think of one himself. “I don’t want to waste songs on girls that are going. I’d rather save them for girls that are coming,” he said.

In matters of the heart, Steve Earle has always been an optimist. There are several better-known tunes on the “Guitar Town” album, but when it comes to young(er) love all you really need is “Fearless Heart.” With Whitmanesque exaltation of his own resiliency, the singer sings: “I got me a fearless heart/ strong enough to get you through the scary part/ its been broken many times before/ a fearless heart just comes back for more.” Whatever happens, he’ll bounce back; all previous failures are only recon so as to guide His Own True Love Of the Moment across the “scary part.” Back then, Steve had faith in his ability to fall in love again, no matter what. It was a strange dichotomy. With an unmatched talent to describe the heartbreaking (as with the doomed Billy Austin, “twenty-nine years old, quarter Cherokee I’m told”) the singer largely avoided his own heartbreak.

So what’s different now? Why have we suddenly been given a sardonic if playful kiss-off number like “Go Go Boots Are Back Again,” which might be Steve’s “Leopard Skin Pill Box Hat." The same question could be asked about an elegiac shuffle like “Best Lover I Ever Had,” with its sexually-charged lament, “never had another kiss taste like that/you’re the best lover I ever had.” And what can be made of “Better Off Alone,” a mournful cry of the newly adrift that Steve says represents “completely unchartered territory for me, and probably the best song on the record partially for that reason.”

“I mean, I thought I had it pretty much licked. I had a little bit of money in the bank for the first in my life. I’d been married for longer than I ever had been. Allison (his last wife, singer Allison Moorer) and I were together for eight and a half years. None of my other marriages had lasted more than three or four. We had this great little kid. I thought, okay this is how it is supposed to be. It was the only time I’d ever married when I was sober. Those other marriages were in the 80’s when I was using. After that, I lived with people but I didn’t marry them. I didn’t think I was ready. Then, I thought I was and it didn’t work out.”

“I knew I’d make a blues record back when I was doing the Low Highway. Fucking weird, doing the sessions of that record – Allison’s on it but we were really coming apart. After that, I spent a long time on the road, a lot of time by myself. I wrote a third of Terraplane on tour in Europe, five weeks traveling around alone with just a guitar, a mandolin and backpack. I needed to be by myself and I needed to see if I could do it. Songs like `Better Off Alone’ came out of that.”

“I’m still alone, so I’m thinking maybe that’s just the way its gonna be for me. I’m still an optimist but like I don’t have a lot of optimism about current politics, maybe I have less about relationships. That’s what I’m telling myself right now, anyway. I’m feeling pressed for time. I’m going to be sixty years old. I’ve got a four-year-old son. I have no idea how things are going to turn out for him. I have to make sure he’s kind of set up. My father died when he was 74. I’ll probably outlive him but you know, you just want to make it all count.”

“I’m patient, but I’m focused. There’s a lot to do. I’d like to write a musical, I’m working on a country record. I think a lot people this age feel like this. And if there’s one thing I know about songwriting, it doesn’t matter if it’s a love song, a song for my kid, or about an issue, something I saw on TV – people don’t give a fuck what I think about it, what they do give a fuck about is what experiences we have in common. As a songwriter, that’s where I want to go, to touch that place between me and you.”

Then, simply because Steve has too much hellraiser in him to leave it like that, he invoked the name of Willie Dixon, writer of some of the greatest modern blues songs, tunes like “Back Door Man,” “Hoochie Coochie Man,” “Spoonful,” “You Can’t Judge A Book By The Cover,” which were recorded by people like Muddy Waters, Howlin’ Wolf and Bo Diddley. Asked why he wrote and played the blues, Dixon, three hundred pounds and crusty sharp, reputedly said, “money and women, what else is there?”

This was as good an answer as any, Steve remarked with a laugh. Because when it comes down to it – and to the great benefit of Steve Earle’s many admirers – it’s only so long that an honest man can avoid playing the blues. 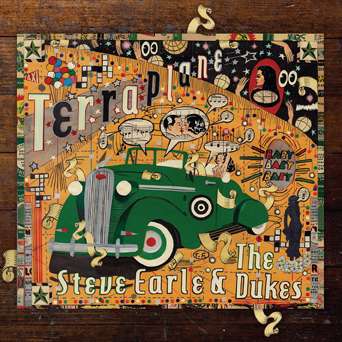