JERRY JOSEPH AND THE JACKMORMONS

Jerry Joseph has worn a lot of hats over more than three decades in the music trenches – righteous rocker, hyper-observant cultural observer, spiritual & political firebrand, force of nature live performer – but the bedrock of what he does has always been songwriting of the highest caliber.  Joseph is a kindred tunesmith to sharp, craftsmanship minded pros like Elvis Costello, Warren Zevon and Nick Lowe, where the resoundingly sturdy bones inside their compositions shape things no matter what’s draped over them.  It’s a dedication to fundamentals and classic singer-songwriter standards that’s increasingly rare and welcome in a music environment that emphasizes texture and mood over substance.  While Joseph has made acoustic albums in the past his new self-titled record (available 10/31/13 on Cosmo Sex School) is his most exposed studio effort to date, the man, his guitar and songs standing in the spotlight with an open invitation for listeners to sit at his heel as he explores some of the strongest, finest reaches of his rich catalog.

“It was hard to do,” says Joseph.  “It’s like that dream where you’re naked at school except I’m naked in a circle with my favorite songwriters. Nick Cave, Aimee Mann and Robert Wyatt are there and say, ‘You play one, Jerry.’  What the fuck do I play? Well, I play ‘War at the End of the World,’ ‘Cochise’ or ‘Spy’ and hope they don’t laugh me off the stage.  In the end, the point of this album is to get in that circle and show what I’ve got.”

With clear, pleasantly immediate production from longtime collaborator Gregg Williams(Blitzen Trapper, Dandy Warhols), Jerry Joseph draws out hidden gems from his writing for Stockholm Syndrome, The Denmark Veseys and earlier overlooked solo releases to explore the soul floating inside his work.  It’s an intimate, passionately delivered, patiently rendered portrait of a serious songsmith laid bare akin to Chris Whitley’s Weeds, Joni Mitchell’s Blue, Michael Hedges’ Watching My Life Go By, Tim Bluhm’s California Way, and Patty Griffin’s Living With Ghosts.  It’s an album that sighs and laughs in real time, the emotional core lifted to the surface, the truths inside the songs as shiningly visible as their creator in this special setting.

“We recorded about 30 songs chosen carefully from the whole catalogue though consciously less from more recent records,” says Joseph.  “What ended up on this album represent, to me, pretty good songwriting presented in a super intimate, completely unaffected way.  We tried for perfect takes early on and figured out quickly that we just needed to let the tape roll and let each performance be as honest as possible.”

“They’re not my children, but I feel like I owe it to the songs to explore possibilities and reflect on them in a different light,” says Joseph.  “With this record we wanted to leave every verse in, let the songs breathe a bit like early Dylan albums – clean, recorded with really good mics, versions that mean something.”

Joseph first came to prominence in the mid-1980s with still-beloved cult band Little Women, a reggae-rock proto-jam band that dominated the Rocky Mountain club scene for nearly a decade, and notably helped break jam giants Widespread Panic, who looked up to Joseph and opened for his band before rising to prominence.  To this day, many of Panic’s favorite concert staples were written by Jerry Joseph, including such blazing epics as “North,” “Chainsaw City” and “Climb to Safety.”  Today, Joseph neatly describes Little Women as “a mash-up of Burning Spear and the Grateful Dead dressed up like the New York Dolls.” 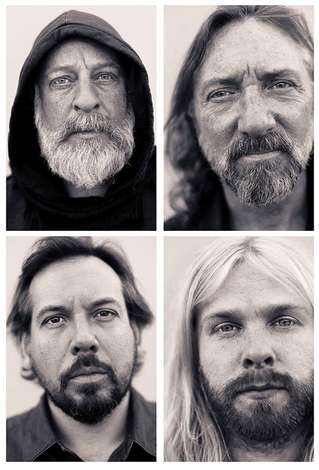