Warrior Xtreme returns to Southgate Civic Arena on Saturday on June 13th with an other round of LIVE MMA Action. Featuring 18 fights , Four TITLE FIGHTS and 3 Woman's MMA bouts, Main Event is Will Frost Defends (16-5) he`s Featherweight Belt vs One of the Top Contenders in Michigan Bryan Scott (28-4) , Co-Main Event at the Middleweight division, both Adam Trombley (32-10) vs Travis Pettengil (42-8) have held Multiple Titles in the Middleweight, LHW and HWY divisions! This will be the battle of the beasts! Also we have an open Lightweight championship bout between Chris Truba (8-3) vs Antoine Blassingame (24-8).  And manty more of the Midwest Top MMA Talent , for more info go to wxcmma.com or call 734-693-4353 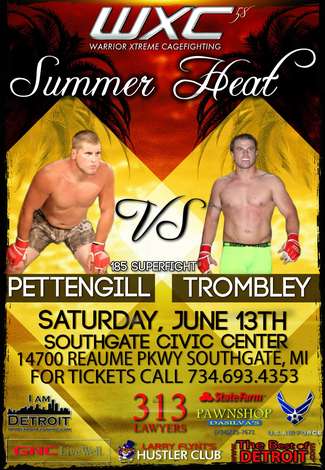