#1 Elvis Tribute In The World

Don't miss the Greatest Elvis Impersonator Of All Time Ben Portsmouth in Van Wert, Ohio on August 15th in Honor of the 38th Anniversary of the Death Of the King Of Rock and Roll Elvis Presley Aug. 16th. 1977, (with a full 9 piece band.) Tickets are $25 in advance and $30 at the event

Fans from all over the world declare he is the closest they have ever seen to Elvis Presley. Social media forums have been overwhelmed with fans from the US demanding Ben to return to the States. Due to Ben’s recent success in the US our agency is convinced there is an untapped market for the unmatched talent of Ben Portsmouth.

What a success within less than two years! Ben Portsmouth accomplished what no other Elvis Tribute Artist has achieved. He has won three major Elvis Presley Enterprise endorsed contests, culminating in the crown jewel of contests the “Ultimate Elvis Tribute Contest” held in Memphis during Elvis week,commemorating the life and legend of Elvis Presley. 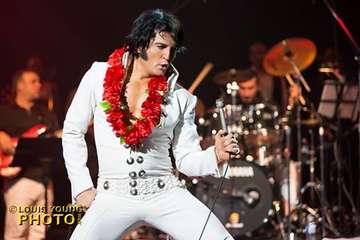