Each Ticket provides entrance to the show, and 2 OBB sample craft beers from Old Black Bear Brewery prior to the show.  In order to participate in the craft beer portion of the evening, attendees will need to arrive at least 45 minutes prior to show time.  Inside the venue, all beverages will have to be purchased through VBC concessions.

With thousands of radio, television and stage appearances under his belt, Killer Beaz has been entertaining audiences for over 30 years.  Touring the country supporting his most recent release, "Don't Ever Touch Anybody You Don't Know!" The CD is on the Warner Brothers label, home to the Blue Collar comedians.  It has received such reviews as: “Beaz’s style goes far beyond your Larry the Cable Guy type of humor in a way that makes him utterly relatable for just about anyone."  -UNDER THE GUN REVIEW/SPIN MEDIA The CD is now available for purchase at  iTunes, Amazon, Wal-Mart, Google Plus, Rhapsody and eMusic.

"Beaz is always a home run guest on our show! Our listeners can't seem to get enough of him!"

With his trademark “Save Up!” refrain, Killer Beaz has become a familiar, beloved performer to millions of comedy fans nationwide.  Beaz delivers edgy, high-energy “everyman” style humor that appeals to a wide audience from Anchorage, Alaska to Miami, Florida.  A gifted storyteller, with tons of punch lines, his shows are fast paced and fun!

Don’t Miss an opportunity to watch “The Best Buzz in Town!”

See him on television, hear him on the radio, see his stage performance live...you'll be "Stung for Life!"  The comedian hits the stage on Saturday, April 25, 2015 at Bay St. Bay St. Theatre in Savannah, GA. Tickets are available at savannahcomedyrevue.com or by calling 314-503-9005.  To find out more about Killer Beaz, check out his website at www.killerbeaz.com. 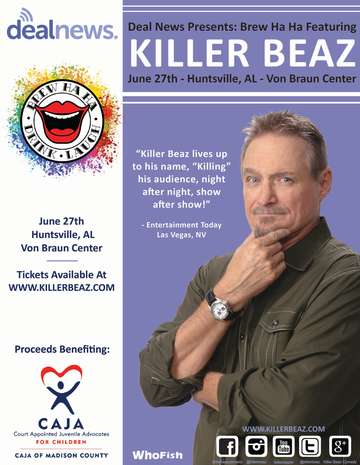