> Events in Massachusetts > Open the Door for Three

Open the Door for Three

Over the last two decades the members of this talented trio have been mainstays of the Irish music scene distinguishing themselves with Riverdance, Cherish the Ladies, Secret Garden, Anúna, Celtic Legends, and The New York Pops, as well as mainstream pop-artists Don Henley, Paula Cole, Bonnie Raitt, and Josh Groban. They have performed in venues around the world: on Broadway, at Carnegie Hall and the Kennedy Center, at L’Olympia and Palais de Congrès in Paris, Malaysian rainforest festivals, piping tionóil in Ireland, theatres from Shanghai to São Paulo, cruiseships in the Caribbean, and even a bullring in Mallorca. Their debut release “Open the Door for Three” was one of the most well received albums of 2013.

A highly respected and sought-after performer of Irish traditional music on the uilleann pipes, concert flute, and tin whistle Kieran O’Hare  is the first American-born player of Irish music invited to perform in the annual ‘Ace and Deuce of Piping’  concert, held in Ireland’s National Concert Hall. He has made countless appearances at festivals and concerts in North and South America, Japan, China, and Europe. Artists he has performed, toured or recorded  with include the Paul Winter Consort,  Josh Groban; and Don Henley. In addition, Kieran appeared in a musical role in the Sam Mendes film Road to Perdition.  Kieran serves on the Board of Directors of Na Píobairí Uilleann in Dublin, Ireland, an organization dedicated to the preservation and promotion of uilleann piping worldwide.

Dublin born Pat Broaders attended the School of Music in Chatham Street in Dublin. He started out on the whistle, and later moved on to the uilleann pipes under the tutelage of Leon Rowsome. In 1998 he took up the bouzouki in 1988.  Moving  to Chicago in the early 90s, a city associated with many prominent Irish musicians he has held  one of the longest running gigs in the history of Chicago (and possibly the world), he has performed and recorded with Jimmy Keane and their group Bohola, Dennis Cahill, Liz Carroll, and Martin Hayes, as well as a host of other musicians in and around Chicago. He has also fostered a healthy career outside of Chicago, playing with such musicians as John Doyle, Paddy O’Brien, Mick O’Brien, Robbie O’Connell, and Danú.

As a member of Riverdance and  Cherish the Ladies and as a  soloist on the soundtrack for the film Michael Collins, Liz Knowles has distinguished herself as one of Irish music’s top fiddler’s and has performed in such prestigious venues as Carnegie Hall, the Kennedy Center and Broadway. She is well respected on both sides of the Atlantic as a player, composer and teacher. Her compositions and arrangements of tunes and songs have been recorded and performed by John Whelan, Flook, Chicago’s Metropolis Symphony Orchestra, Liz Carroll, Beolach, Bachue, J.P. Cormier, Michael Black, John Doyle, and Ensemble Galilei. 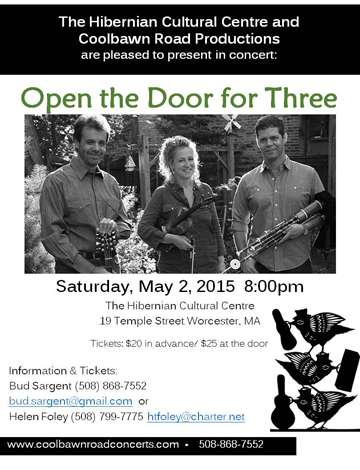