The CARD Foundation is pleased to announce its 5th annual BIG SKY BASH concert to benefit the Center for Asbestos Related Disease (CARD). Legendary music icons, THREE DOG NIGHT and local favorite COPPER MOUNTAIN BAND will be performing in Libby on Saturday, July 11th, 2015, with gates opening at 6pm, and music playing from 7pm until midnight at J Neils Park.

Perfectly re-creating their larger than life songs with customary impeccable harmonies and exciting arrangements, THREE DOG NIGHT will perform their hits including “Mama Told Me (Not To Come)”,  “Joy to The World”, “Black and White”, “Shambala”, “One”, “Liar”, “Celebrate” and many more songs that drive their chart and sales success.

Initially brought together in 1968 by Danny Hutton and Cory Wells, THREE DOG NIGHT recorded the music of the best (and mostly undiscovered) new songwriters of their time including Harry Nilsson, Randy Newman, Elton John, Laura Nyro, Paul Williams and Hoyt Axton among many others. The group’s eclectic taste, combined with their ability to recognize and record hits in a unique, distinctive and appealing style, resulted in THREE DOG NIGHT dominating the charts for years.  The now-famous name came from a story about Australian hunters who, on cold nights in the outback, sleep with their dogs for warmth. The coldest evenings are known as a "three dog night".

Recently THREE DOG NIGHT added new songs to their arsenal with the release of their first double-A sided single in nearly 25 years. These new tracks, "Heart Of Blues" and the a-cappella ballad "Prayer of the Children”, are available now in an exclusive online release.   See www.threedognight.com for more information.

After more than 40 years together, THREE DOG NIGHT continues to grow its fan base and develop new ways of doing business.   They maintain an aggressive schedule of concerts at theatres, performing arts centers, fairs, festivals, corporate events, and casinos. Since 1986, they have performed over 2,300 shows including two Super Bowls.

COPPER MOUNTAIN BAND is a high-energy, mainstream, country music group with family roots that lie deep in the history of Montana. Copper Mountain Band appeals to all audiences as they incorporate music from many genres and styles into their performances. They have found a way to give cover tunes a whole new dimension and they have outstanding original material as well. They have also received praise for their rendition of Cher’s “Just Like Jesse James”.They are a one-of-a-kind group with a fiery passion for their craft. The band plays more than 150 dates a year throughout the US and abroad and continues to build their fan base on their way to the top!

Tickets will go on sale May 1, 2015. Ticket prices will be $25.00 advance purchase and $30.00 at the gate. All proceeds from this event will go to the CARD Foundation, the fundraising arm of CARD, to support CARD in its ongoing efforts to provide healthcare, research and outreach to benefit all people impacted by exposure to Libby Amphibole Asbestos. For more information please call 406-293-9274 ex 132 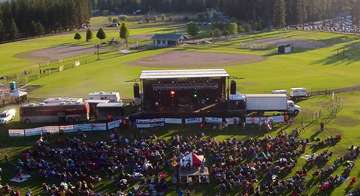