"In a sea of off-key wailers and tin can drummers, there are the select subway performers who actually blow our minds…Rhett performs Taylor Swift's pop hit "I Knew You Were Trouble" in a Boston train station. The angsty teen ballad filled with dubstep beats is surprisingly catchy when played on classical instruments. Rhett Price’s unique take on top hits has made him quite the phenomenon. He has caught the eyes of 1.5 million YouTube viewers with his renditions of Taylor Swift and his original songs!"  -says The Huffington Post

Rhett Price is out on a US Colleges Tour with his debut album "Kesha's Mom". #10 on the iTunes Alternative EP chart and #12 on Billboard’s Classical Crossover list. While that range of genre classifications might seem strange, the spectrum makes perfect sense for - a guy with a pop star’s ambition and a desire to show a younger and wider audience how diverse violin music can be.

He has performed on stage with the Dropkick Murphys, The Maine, and Amanda Palmer; has been requested at private parties for Patriots star Rob Gronkowski and on Red Sox owner John Henry's private yacht; was awarded BostInno's '50 On Fire' award against thousands of nominees; was chosen as Channel 5 Chronicle's "People To Watch"; and performed on stage as a guest soloist with the Boston Ballet during the North American debut of Cacti. 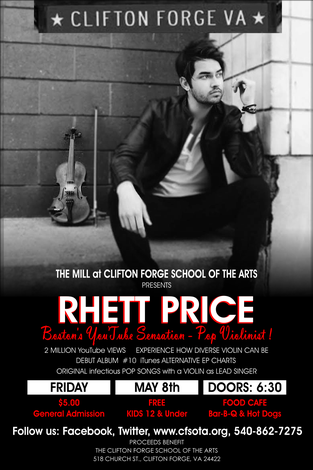