The American Hayride Revue preserves and promotes the country music of the "Hayride Era" (1950-1985)  Many of the great country stars were loved by America because of programs like the Louisiana Hayride and several other Opry and Hayride shows throughout the nation.  Radio programs beamed the songs of these artists across the airwaves of America.  Those days are gone, but the music lives on.  The American Hayride Revue is re-creating the atmosphere and the music of that important era of music history.

We hope you will support the efforts of the American Hayride Show when it comes to your town.  You never know who may be singing on the stage.  Besides, its just plain old fun and entertaining.  Y'all Come.

The first show will be at the Cleburne Convention Center in Cleburne, Texas on Thursday, April 30th at 7:30pm.  Allen Hurt will be the Guest Country Artist along with Gene Snow and the Ameerican Hayride Band. 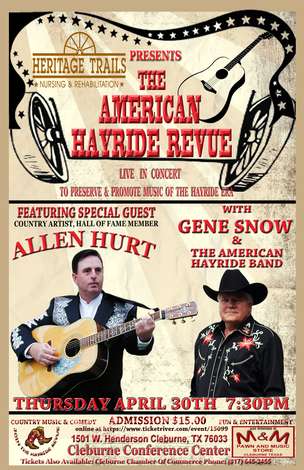