The Flamingo’s  known as the “Ambassadors for     Romance” are a rock and roll hall of fame doo wop group from the 50’s and 60’s.  With their  elegant and flawless vocal arrangements, they are widely regarded as one of the best vocal groups in music history. Their show will include all their top tops from their 4 albums such as, “A Kiss From Your Lips", “I'll Be Home", "Lovers Never Say Goodbye”, “Mio Amore” but best known for their smash hit    “I Only Have Eyes for You”, which is still one of the top romantic songs of all time. In concert, with 9    charted hits and 4 albums, The Flamingos expand their repertoire to include classic songs from the American Songbook.  This show will be a memory filled concert that will bring fans to their feet. 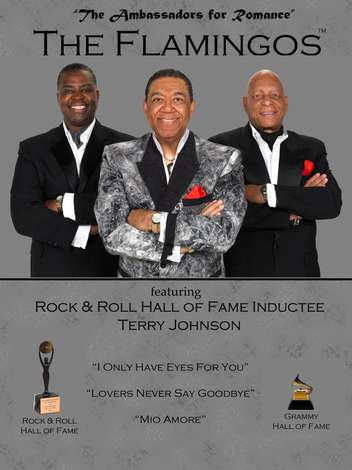