Highlighting the show will be “The Jersey Comic” Dennis Ross, a favorite in comedy clubs from coast to coast, and, straight from Brooklyn, Gary Keshner. The show will be emceed by Dave Evans, “The World’s Funniest Accountant.”

A New Jerseynative and resident, Dennis Ross is a 20-year comic veteran who has worked with everyone he has performed throughout North America, as well as for the troops in Japan, Korea, and Iraq. He has had numerous appearances on television, including a half dozen appearances on Canada’s Comedy Network. A 20-year comedy veteran, he has worked with everyone from Lewis Black to Chris Rock, and has opened for the Beach Boys.

Known as “The Jersey Comic,” he brings his observations about everyday life into his unique and refreshing act. He considers himself a “spectator to everyday insanity,” Defying the caricature of the typical manic comedian, takes a more casual approach in bringing to his audience his distinctive world-view in material that his extremely clever and hilariously truthful.

Gary Keshner’s love for comedy began very early. At eleven years old, he would listen to his family’s comedy albums so often that he could do the routines verbatim. This led to him being the class clown from then into his college years. He did not get to the stage until the late 1990s but, from the moment he stepped on stage he has achieved fame and success with his self-deprecating humor as “Love’s Loveable Loser” and quick wit making him a favorite everywhere he performs.

From Brooklyn, NY, Keshner won “The Best of Staten Island” in 2010. He has been a featured comedian in NBC’s “Jane’s New York” and was in the film Last Night in Brooklyn as Lil Phil. the mob boss, and the voiceover  or “Moo.” He has performed in shows with comics such as Al Lubell, Don MacArthur, and Paul Venier

Dave Evans is a Cherry Hill, NJ CPA who has become a successful stand-up comedian. Before making his debut at the Comedy Crap Shoot at Atlantic City’s Taj Mahal in late March, Evansappeared at the Comedy Cabaret Northeast in Philadelphia in February, as well as at othervenues in the Delaware Valley area. 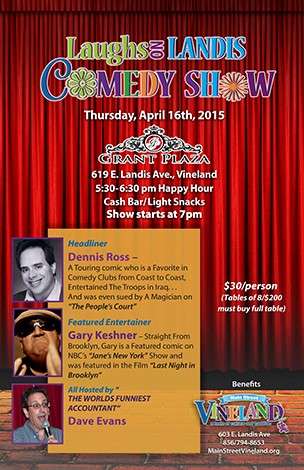