David and Patrick Doocey will be performing in Worcester for the second time since emigrating with their parents to Ireland, however this time they return as two of the most talked about young musicians on the Irish music scene.

Born in Worcester, Massachusetts David and Patrick moved to Foxford, County Mayo when  their parents returned home.  They are two young musicians who are quickly making their mark on the Irish music scene in Ireland and abroad.

A multi-instrumentalist, David Doocey holds numerous All-Ireland titles on both fiddle and concertina. He has also won the first World Fiddle Championship in 2005 and has also achieved success in the much coveted Feile Oriel. His music can be heard on many recordings and he has recorded in Nashville with Grammy award winners Tim O’Brien and Allison Brown. In the last number of years he has shared the stage with Mike McGoldrick, Tim O’Brien, Dougie MacLean, Martin Hayes, Dermot Byrne, Seán Keane, Sharon Shannon, John Doyle,  Lúnasa, the Daveid Munnelly Band and many more.

David  has toured throughout Asia, Europe, America, Australia and New Zealand.  He also teaches and can be found at the annual Willie Clancy Summer School in Milltown every year in County Clare. He has toured with the international dance shows Ragús, Irish Legends and Irish Dreams and as a member of the band Gráda.  He also performs with the Salamanca Ceili Band.

His debut CD “Changing Time” has been hailed by  Alex Monaghan  of The Living Tradition as “an exemplary debut recording…”   The album It consists of 12 tracks of both traditional and newly composed music, including two pieces which will appear on a documentary about the women of the Magdalene Laundries. It also features the talents of his brothers Patrick and Kevin  as well as Stephen and Kevin Doherty and Ryan Molloy.

Patrick Doocey is also an All – Ireland winning multi-instrumentalist and predominantly self taught on the guitar, Patrick is quickly becoming one of the most in demand accompanists on the Irish music scene today.   Patrick now divides his time between both places. His talents have brought him all over Europe, Asia, Africa and America.   He has also toured and performed with Sharon Shannon, Liz Carroll, Buille, Lunasa, Teada, Atlantic Steps, Ragus, and Irish Legends and has recorded an album “The Foxford Way” with fellow Mayo man Stephen Doherty.

With fiddle, guitar and concertina the two brothers have developed a style of music which is completely unique and full of energy and swing.  No less of an authority on Irish music, Kevin Crawford, had this to say about the two brothers “Two of the most amazing young lads ever to play Irish Music”

The concert will take place on Sunday, March 29, 2015 at the Hibernian Cultural Centre, 19 Temple Street, Worcester, Massachusetts.  Tickets will be on sale soon and are $16 in advance and $20 at the door.  For more information check out www.coolbawnroadconcerts.com or visit the Coolbawn Road Facebook page. 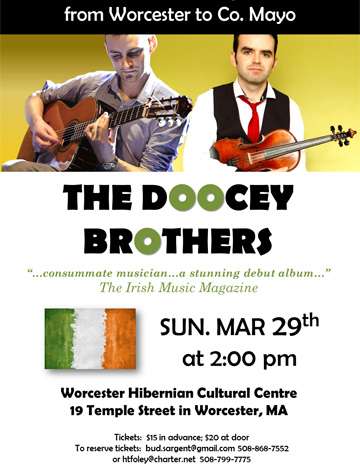