Acclaimed soprano Jasmina Halimic stars as the beautiful and wealthy widow Hanna Glawari, whose countrymen from the failing Balkan state of Montenegro are hoping will marry a local nobleman to save the country from bankruptcy.

Baritone Mark Womack is the playboy Count Danilo Danilovich, Hanna's former lover and now, his country's best chance of surviving . . . if he can only win her back.

Plots are hatched, jealousies arise and complications abound, until everything resolves in declarations of love at the final curtain.

The Northern Lights Opera Orchestra will be conducted by Maestro Gavriel Heine of St. Petersburg's (Russia) Mariinsky Theater. This new production will be directed by Benjamin Spierman with sets designed by Bart Healy. The operetta will be performed in English and Serbian with accompanying English supertitles. 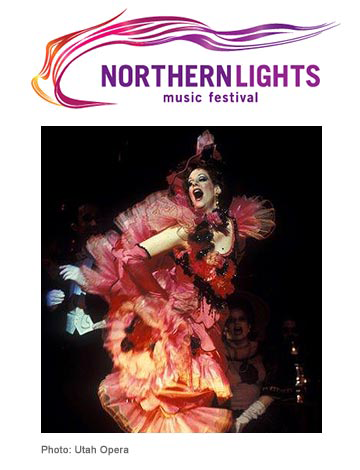