Robbie is no stranger to Irish and folk music fans. He began touring with his uncles, the Clancy Brothers, in 1977 and recorded 3 albums with them.  His album Love of the Land, was voted the #1 acoustic album of 1989 by WUMB in Boston.  He has toured and recorded as a member of The Green Fields of America with Mick Moloney and Jimmy Keane.  The title track of their album, "Kilkelly," was voted "Best Album Track of the Year" in Ireland and was featured on the seminal television documentary on Irish music, “Bringing It All Back Home.”

Paul Dromey of The Evening Echo had this to say about Robbie “a songwriter of vision, awareness and maturity. He has the ability to take an everyday experience or thought and turn it into an effective structured song. All his material is melodic and accessible and his keen sense of humour is never far from the surface.”

Joining Robbie will be two musicians who brought the house down at the Hanover Theatre last March as part of Brian O’Donovan’s St. Patrick’s Celtic Sojourn, Caitlín Nic Gabhann and Ciarán Ó Maonaigh.

Raised in a home full of music and dance in Co. Meath, Ireland, Caitlín is a three time winner of the All-Ireland Fleadh Cheoil on concertina as well as an accomplished dancer.  Caitlín teaches the concertina annually at summer and winter schools in Ireland, Europe and USA and has performed with the RTÉ Vanbrugh Quartet, Paddy Keenan, Liam Ó MaonlaI, Cherish The Ladies, The Kilfenora Ceili Band and for Presidents and Royalty around the world, most recently, at ‘Ceiliuradh’ in the London’s Royal Albert Hall, as a guest of Irish President Michael D.Higgins.

Her debut solo CD release, Caitlín was voted the 2012 ‘CD of the Year’ award by tradconnect.com as well as being labelled the ‘top Irish traditional album of 2012′ by The Wall Street Journal.

A nephew of Altan's celebrated fiddle player and lead singer Mairead Ni Mhaonaigh, Ciarán is a brilliant fiddle player in the Donegal style from Gaoth Dobhair, County Donegal. A grandson of Proinsias Ó Maonaigh (a.k.a. Francie Mooney), he was the 2003 TG4 Young Traditional Musician of the Year and has played with Donal Lunny, Micheal Ó’ Suilleabháin and the Chieftains.

This is a benefit concert for WCUW 91.3fm Worcester Community Radio.  Thank you for your support. 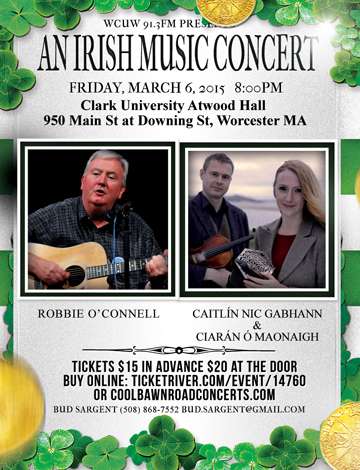