Sherell Rosegreen was on the brink of a successful singing career when she met and fell in love with a charming man. She never imagined that the man she loved would become her worst nightmare.

She was beaten, humiliated, and abused. She was expecting her first baby when he threw her against a brick wall. Her baby boy, deprived of oxygen when the placenta ripped as a result of the beating, died in her arms five hours after birth.

But Sherell is a survivor, a fighter. She put him in jail and made it her life’s work, in addition to her singing, to reach out to women stuck in abusive relationships. In 2014, Sherell founded Inner-Scars organization a non-profit organization dedicated to helping victims of domestic abuse

Now Sherell, a popular gospel singer, has written a book based on her experiences in an abusive relationship, offering advice, help, and support to women who need to reclaim their shattered lives from their abusers.

Entitled Abused under His Charm, the book recounts the story of “Martha,” whose downward spiral at the hands of her initially charming abuser cost her career, her friends, and her child, and almost cost her life. She ignored the concerns of those who cared about her, isolated herself from her dearest friends, and lost her self esteem, until she finally hit rock bottom, gathered her resources, and came out fighting for everything she loved—her children, her friends, her faith, and her wonderful singing voice.

A book launching and stage play based on the book will be held on April 11th 2015 at 6:30 PM at the Jewish Community Center 851 Maitland Ave,Maitland FL, and will be open to the public. 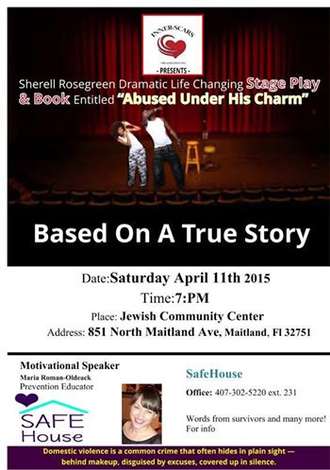