Tickets include a rose for the ladies

Comedian Killer Beaz is touring the country with his most recentalbum.  Beaz's release, "Don't Ever Touch Anybody You Don'tKnow!" is on the Warner Brothers label, which is home to the Blue Collarcomedians.  The stop in Florence is part of a Valentine's Weekend at the Marriott Shoals.  The Marriott is offering a "RomancePackage" for Friday and Saturday night, along with the "Romantic Comedy Night" starring Killer Beaz, along with comedians Phil Hogan and Kristen Kinsey, presented by Big River Broadcasting.

"I saw Beaz for the first time on stage in Vegas over 20 years ago and had the opportunity to meet him after the show...what a genuinely great, down to earth guy!  I laughed my a#$ off then and continue to do so every time I see his show. Itis a great evening of entertainment!" --Nick Martin, General Manager of Big River Broadcasting. 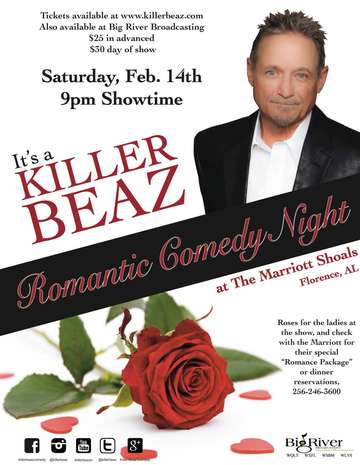