> Events in Montana > Aaron Watson: Live at the Silver Spur

January 9, 2015 - The Silver Spur Arena in Belgrade, along with VI Productions, is proud to announce the return of Texas country recording artist, Aaron Watson on Friday, April 23, 2015 at 8PM.

BIG Label Records country recording artist, and lone star legend from Amarillo, Texas, Aaron Watson, returns to Montana for the release of his twelfth album, The Underdog. "I've always liked the idea of the underdog," says Watson. "I've always liked the idea that the guy who's not supposed to win could still beat all the odds through hard work and perseverance. A lot of people are always telling us that what we're achieving in the music business is just next to impossible. I don't really consider it that way. We're just out there working hard."

'The Underdog,' then, is more than just an album title for Watson. It's a mission statement.

"The idea of the underdog really describes where I'm at right now in my career and what we're trying to achieve with this record," he explains. "I'm not one of these guys that can put on a pair of skinny jeans or turn my hat around backwards and sing those pop country radio songs. Nothing against the guys who do that because it's their thing and true to who they are, but if I played that role, it wouldn't be me. When I'm singing these songs hundreds of times a year, they need to be things I personally believe in.”

For Watson, there are three things he believes in above all else: family, faith, and fans.

"There is no Aaron Watson without those three things," he says. "My faith is what guides me. It keeps me focused on my music. God has blessed me with an amazing wife and beautiful kids, and at the end of the day, success to me is working hard and making a living for my family. That's all any dad wants. My fans like the fact that I'm really a normal guy," he continues. "If I can't get on stage and talk to my fans about my faith and my family, I've got nothing."

Tickets are available at Cactus Records in Bozeman, online at www.ticketriver.com, and at the door. 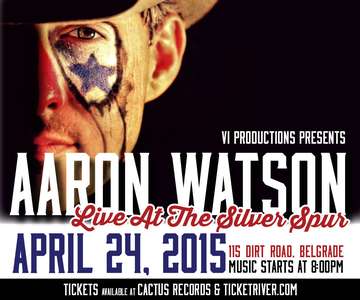