As always, we will present you the Super Bowl of Michigan MMA in January 23rd  WXC 54 Night of Champions VII will be featuring 6 TITLE Fights in WXC's mans and womans divisions!

WXC 54 Night of Champions VIIWe are pleased to start rolling out a few of the excellent match-ups you will see for our 7th Annual Night Of Champions…Starting with the 205 LB belt battle between Travis Pettengill & Quame Beck. Both of these warriors are ready for professional level MMA & will leave it all in the cage Friday, January 23rdThe 145 strap will be defended by the truly talented Taylor Moore of Team SFS – Scorpion Fighting System, as he goes head to head with the hard working Will Frost of the True Fighter Fight Team, Who has more than earned his shot @ championship gold…This one has 5 round potential, guaranteed!Marcus Maulding is on a five fight win streak earning him a shot at WXC Gold Vs the Very dangerous Khaos Williams! Do not blink during this fight! Stay tuned for more match ups..this card is stacked!WXC is excited to kick off the year continuing to build our female division! Alesha Zappitela Vs Elane Santiago is going to be a WAR!Here we go with another Great match up for our 7th Annual Night Of Champions! John Chalbeck returns to our cage after a devastating spining KO kick to face off with the very dangerous Akash Pannu. Stay tuned! All the match ups will be coming out all week long.Russell Campbell Vs Dante Brown should be a three round war! Both fighters have a lot of experience in the cage.Jacked ‘n Tan Fight teams Zach Rini is coming of a huge victory facing the absolute heavy”stone”handed Brian Jackson, Don`t miss these one!Next up for WXC 54 we have Rodney Miracle out of SW Fight Team Vs Billy Askar out MTT! This is a solid bantamweight match up!WXC loves our Flyweight fights! Antoine Hill Vs David Debois are both wrestlers evolving into true mixed-martial-artist. This should be a fast pace three round battle!This is what we call icing on the cake! Miranda Dearing Vs Crystal Baetz takes this fight card to another level! Both fighters are true mixed-martial-artists and will show everyone how talented our female division has become!These will be a banger! Matt Christoper (United MMA) vs Larry Roy (TrueFighter) for WXC 54 Night of Champions VII Jan 23rd See you CagesideThe WXC 54 card is absolutely stacked! Dean Walsh Vs Josh Guthrie is not going past the first round. Both fighters go for the kill and have been around the amateur circuit for years!Photography will be provided by The Best of Detroit! Come ready to get your photo taken. Give our pages a LIKE http://www.facebook.com/TheBestofDetroithttp://www.facebook.com/wxcmmaFor more go to www.wxcmma.com Warrior Xtreme 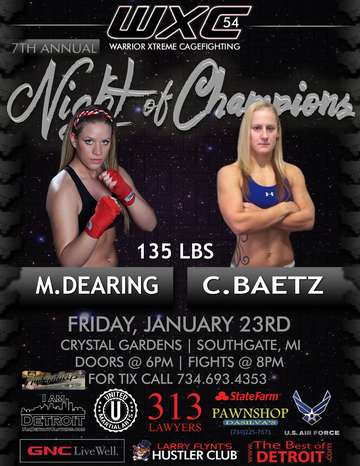