Even after more than two decades on the road, 14 boundary bending recordings and collaborations, multiple Blues Music Awards, personal and professional breakthroughs Tommy Castro, a veteran road warrior – and one of the most successful blues musicians in the world – takes nothing for granted. In 2012 Castro weighed in heavily again and turn yet another corner.  Stlll inspired by his blues guitar and R & B vocal contemporaries and a strong desire to push the boundaries of today’s roots music Castro has brought together an all new band he calls “The Painkillers” to do exactly that. Foregoing the horns this time out Castro returns to a more stripped-down lineup that recalls the earlier days of the band and even features original bassist Randy McDonald along with new band mates Byron Cage on drums and James Pace on keyboards. The leaner unit allows Castro’s versatile guitar work to come to the fore and his soulful voice to tell the story in every song.  Take caution... these Painkillers ARE habit forming!

TOMMY CASTRO AND THE PAINKILLERS BRING THE DEVIL YOU KNOW TO NEW SMYRNA BEACH!

"Tommy Castro And The Painkillers are a crackling, stripped-down band with plenty of grit and a rocking soul" --Jambands.com

Tommy Castro And The Painkillers, touring in support of their latest Alligator Records album, THE DEVIL YOU KNOW, will perform at the OM Bar and Chill Lounge in New Smyrna Beach on Friday, January 16, 2015. Award-winning guitarist/vocalist/songwriter Castro is famed for his signature brand of tough, rocking rhythm and blues, thrilling fans around the world with his incendiary live performances. With his eyes and ears firmly on the future, Castro, along with The Painkillers - original Tommy Castro Band bassist Randy McDonald, David Tucker on drums and James Pace on keyboards - has stripped his music down to its raw essence as he rockets into the next phase of his storied career. Castro And The Painkillers recently received a 2014 Blues Blast Music Award for Rock Blues Album Of The Year (for THE DEVIL YOU KNOW). Concert information is as follows:

Music video for Tommy Castro And The Painkillers' single GREEDY:www.youtube.com/watch?v=EoTBze2uIVE

THE DEVIL YOU KNOW, recorded in the Bay Area with his fiery new band The Painkillers, and produced by Castro and Bonnie Hayes, is a contemporary blues tour-de-force. The album is an untamed, high-energy set of 13 songs, including nine written or co-written by Castro. "For the new album I challenged myself to add different sounds and new rhythms to my style while remaining true to my roots. I wrote using ideas for songs and ideas for sounds together in a way I'd never done before," explains Castro, "using drum rhythms to drive the lyrics." The tracks -- melodic and biting, energetic and fun -- are brought to life with sonic authority by McDonald, Pace and original Painkillers drummer Byron Cage.

In addition, many of Castro's friends and admirers, including Alligator label-mates Marcia Ball and The Holmes Brothers, add their talents to the proceedings. Other guests include guitarists Joe Bonamassa and Mark Karan, guitarist/vocalist Tab Benoit, vocalists Samantha Fish and Tasha Taylor, and harmonica player Magic Dick. Each song comes loaded with emotional depth and muscular hooks courtesy of Castro's soulful singing, insightful lyrics, and dynamic, potent guitar playing. With THE DEVIL YOU KNOW, Castro -- The Painkillers blazing behind him -- unleashes an instant classic. According to Blurt, "Castro is one of the greatest blues guitarists, songwriters and entertainers in the world today."

After years of playing guitar-driven blues and R&B backed by a tight horn section, Castro introduced The Painkillers live in 2012, creating a lean, mean four-piece lineup, with the drum chair now held by David Tucker. Fueled by Tommy's voice and guitar plus bass, drums and keyboards, the band released the 45rpm single Greedy / That's All I Got later that year (both songs are included as bonus tracks on the new CD). Greedy quickly became one of Castro's most-requested songs. An attention-grabbing video for Greedy has already received over 150,000 views on YouTube. The Chicago Sun-Times calls his music "fiery and soul-drenched."

Castro views the harder-edged sound of The Painkillers as a natural extension of the music he's been making since he was a teenager. "The Painkillers really get me back to my roots. It feels to me a lot more like it did when I first started playing with my friends as a kid. Bands were always just three or four guys playing for the fun of it," Castro recalls. Now, Tommy Castro And The Painkillers are pushing the music to another level.

Tommy Castro And The Painkillers are anxious to bring THE DEVIL YOU KNOW to life on stage night after night, personally connecting with their fans all over the world. "A lot of folks are having hard times these days," Castro says, "and they need something to lift them up and make them smile. Our music kills the pain." 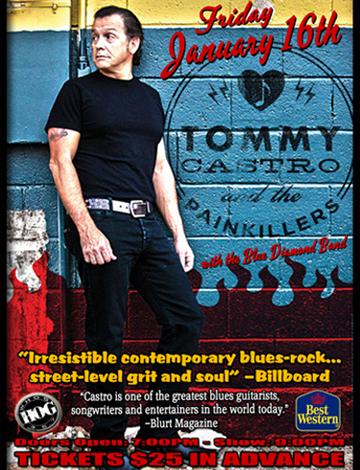