PHILADELPHIA PA: Come see Massachusetts’ own TERMANOLOGY as he stops in Philadelphia to further prove hip hop is far from dead. Sharing the stage with Term will be some of  the“Tri State Greats” like:  Burke The Jurke, Prince Alexander, Skrewtape, Trazsh Man, Trel Mack, Voss, Rich Quick, Sin Thetic, Xap, Dutch Dap, and new comer Young Heemz. The  legendary DJ Jay Ski will be on the ones & twos for this epic hip hop event. You don’t want to miss it!

With an EP released in May; MAS G.O.Y.A. continued to show Term’s lyrical skill of slaying mics.

About Termanology: Daniel Carrillo (born October 8, 1982), better known by his stage nameTermanology, is a American rapper from Lawrence, Massachusetts. He first gained major attention with the 2006 single "Watch How It Go Down". A solo album, Politics As Usual, was released in 2008. He has made a number of collaborative albums, such as 1982 (released in 2010) and is known also for his prolific mixtape output. 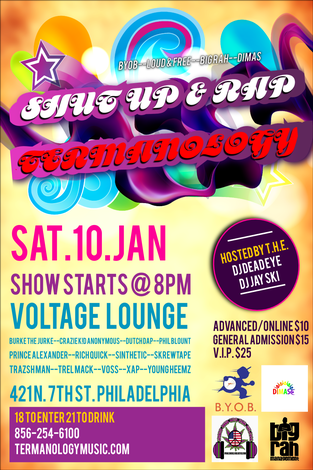