Get your tickets early to the 1st Annual BIF Film Festival!

Brought to you by Black Diamond Equipment

Join the Bozeman Ice Festival presented by Black Diamond Equipment on Thursday, December 11 in the beautiful Emerson Crawford Theater as we launch our new BIF Film Festival format and proudly announce the winners of the 2015 Mugs Stump Award.

World Premier! Rjukan; The Power of Water which is a profile of one of the world's up-and-coming ice climbing destinations and features climbing by Ines Papert and Heike Schmidt, presented by Black Diamond Equipment (5 minutes)

An American Ascent documents the first African-American expedition to tackle Denali, North America's highest peak and explores the complex relationship many African-Americans have with the outdoors. As the U.S. transitions to a 'minority majority' nation, a staggering number of people of color do not identify with America's wild places. By embarking on the grueling multi-week climb of the 20,327ft Denali, nine African-American climbers set out to bridge this 'adventure gap'— challenging outdated notions of what adventure looks like by changing the face of America's biggest and baddest mountain on the 100th anniversary of its first summit. Presented by Distill Productions and Mercury CSC. (~50 minutes).

Followed by the best dang gear raffle on the planet. 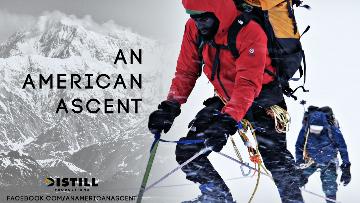