A Journey through Mythology

Is it a dance-form? A pantomime? A classical theater? A story telling tradition replete with super-human characters in myriad hues? In fact it is very difficult to give a comprehensive definition of KATHAKALI (Katha – Story, Kali – Play).

A classical dance-drama tradition dating back to 17th century, KATHAKALI of Kerala (India) is now the most widely known art form in the East and the West alike. It encompasses dancing, acting, vocal music, percussion music, intriguing make-up, fantastic costumes and a riot of colors. Traditionally a nocturnal event held in the temples of Kerala, KATHAKALI remained for the most part a non-liturgical heritage. Known for its elaborate make up with colors, highly developed hand and eye gestures, rigorous body and foot movements, KATHAKALI is one of the oldest theater forms in the world.

Upasana Foundation, a Texas based non-profit organization involved with promotion of cultural exchange through traditional artforms brings to you ‘A JOURNEY THROUGH MYTHOLOGY’, a rare opportunity to watch KATHAKALI, here in Houston. 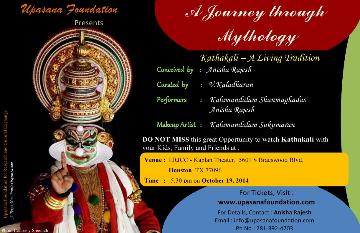