> Events in Montana > The Orphan Girl

COME CELEBRATE THE FUTURE OF BUTTE.

Welcome to the Premiere of THE ORPHAN GIRL film, with exclusive viewing of the Behind the Scenes, and the "Butte Legends."  You will also be treated to live music by Philip Sheppard (who is scoring the film).

Your ticket also includes admission to the After Party with exclusive live music. Join us to celebrate the future of #Butte!

The Orphan Girl is a multi-platform film, produced by Chisel Industries, Headframe Spirits, and the Montana Film Office designed to bring national awareness to Butte and Montanaand support business recruitment.

The Orphan Girl  short film is one component of “The Spirit of Butte,” a broader campaign strategy to increase national awareness for Butte, and tell the stories of modern Montana success stories by profiling Montana’s innovators.The initiative will develop an online series accessed through the web portal, #BUTTEinnovates with vignettes profiling the “Legends of Butte” and present day innovators called “Modern Mavericks.”   The Orphan Girl’s story melds the legacy, heritage, and innovation of Butte’s past, with the future of what is shaping to be a second wave of entrepreneurial enterprise. Butte's pioneer spirit has been rekindled today, and this project is helping to bridge that gap.

This film is being co-produced by Montana’s Entrepreneurs of the Year, and owners of Headframe Spirits, John and Courtney McKee.  John and Courtney are active participants of economic development in Butte, and hold great responsibility in giving back to their community.  Four years ago they started their business and named it Headframe Spirits in honor of Butte's historical past.  They now operate 2 distilleries in Butte, with plans to break ground on the 3rd in 2015, making Headframe the largest distillery west of the Mississippi and providing hundreds of job opportunities to the Butte community.  In 2013 and 2014.

The film is directed by Montana native Yarrow Kraner, who has directed projects for Virgin, Richard Branson, Warner Brothers, TNT network & The Rock, Columbia Records, The University of Montana, Montana State University, Montana Tourism, and more, and his work has been honored with several National and International awards.

The Orphan Girl will be scored by celebrated virtuoso composer Philip Sheppard, who has scored over a twenty-five films, has been featured at Sundance, and collaborated with musicians Jeff Buckley, Pretty Lights, UNKLE, David Bowie and Suzanne Vega.  Sheppard is a professor at the Royal Academy of Music, and scored and recorded arrangements for the world's 205 national anthems for the 2012 Olympics.   In addition, just recently, Sheppard led the orchestra and chorus of Opera North at the opening ceremony of the 2014 Tour de France. 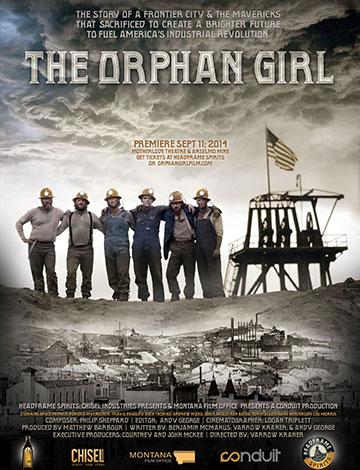