ONLY 150 Tickets being offered - an intimate setting to see Black 47 for one of their last performances.

This legendary Irish rock band has left a lasting legacy and they intend going out with a bang. Their final CD, Last Call, was released in January 2014 and Black 47 will tour constantly until their final date in New York City - Nov 15th, 2014.

They played more gigs at Shea Stadium than The Beatles, shut down the city of Hoboken, appeared multiple times on Leno, Letterman & O’Brien, starred in a movie with their fans Matt Dillon and Danny Glover, helped spring the Guilford Four and the Birmingham Six from British prisons, saved an Irish immigrant church from the wrecking ball.

Anything else? Oh yeah, their CD IRAQ was the most popular with troops serving in Iraq, their song The Big Fellah was featured for 3 minutes on Sons of Anarchy, they’ve played over 2500 gigs from pubs to stadiums and released 14 CDs, their songs are used in hundreds of high school and college history and political science courses, and they intend disbanding on Nov. 8th, exactly 25 years after their first gig in The Bronx. Then again, Black 47 has always done it their way.

Led by Irish author, playwright, and SiriusXM radio host, Larry Kirwan, Black 47 play a uniquely Irish form of rock 'n' roll that touches on many social and political issues, and yet is never less than entertaining and riveting. Black 47 earned their chops playing four sets a night in New York pubs. They gained national attention for their first indie record before The Cars' Ric Ocasek produced their second album, Fire Of Freedom which brought them mainstream attention with MTV favorites, Funky Ceili and Maria’s Wedding. 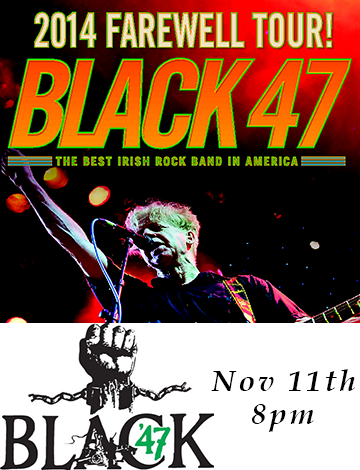