CASEY----30 YEARS LATER!! written by, directed and starring Beverly Bonner, is based upon her “Casey” character in Frank Henenlotter’s cult horror film classic, “Basket Case.”  Released in 1982, this horror film tells the story of a young man who carries his deformed conjoined twin brother in a large basket while seeking vengeance on the doctors who separated them against their will.  Written and directed by Frank Henenlotter, “Basket Case” became a cult hit and spawned two sequels.

The live comedy play catches up with Bonner’s Casey character from the film series.  Casey is running a bar in the East Village featuring Sexy Senior Hookers who, we find, are very feisty and forward thinking and definitely NOT retired.  Casey has them “working”.  Casey cherishes her spooky memories of Basket Case and continues to live in that world but is forced to deal with reality by the family of weirdoes surrounding her, tortured daily by her Reality Show obsessed dumb waitress “Kitty”, dogged by the NYPD who have reports of not only actions unbecoming of mature females but bodies turning up after last seen in Casey’s establishment.  There is infighting and generally disrespect by the Senior Sexy Ladies of the Evening, not to mention not enough money coming in to keep the Landlord at Bay.  There is her “friend” Hands in the Basket with bad eating habits, who may or may not be a serial murderer, and oh yes, there is her visiting innocent religious fanatic niece, Judy.  Bobby DeLuca, a rabid fan of Casey, is a NYU reporter from his college newspaper and website, The NYU Notorious; he is obsessed with all things “Casey and Basket Case.”  It is through this Reporter that we learn what Casey has been up to these last 30 these years.

The show is hilarious and the chemistry and comic timing between Ms. Bonner and the rest of the cast makes for a laughing good time.  Max Cheney, award winning blogger (The Drunken Severed Head), reviewed the 2011 world premiere of the show at the Hollywood Theater in Pittsburgh, PA:

“The premise is that Casey, even brassier and sassier than in her youth, now runs a call girl service for elderly hookers, and is visited by a young journalist who wants to interview her about the people--including the monstrous Belial--seen in the cult movie.

……….it was also very funny! I laughed so hard at one point the row in front of me jumped--but they were laughing, too. I thought this was a smart event--more than a personal appearance of an actor at a film showing, this extended the movie's story.  Henenlotter gave Ms. Bonner his blessing for the show because he enjoys her comedic talent.  It was amply on display here”

“Beverly Bonner remains a genius in one of her latest productions "Casey 30 Years Later."……. Casey and her basket thrill the audience with their more than "special" relationship and their devious yet hilarious ways. Casey, who disowned Beverly Bonner 30 years later, shows us how rewarding life has become by just being Casey. Her dear basket and her ditzy and loyal assistant run a bar with a little side business. Casey is Madame Casey, the head of a stable of Mature and Senior Citizen Hookers, "Ladies of the Evening." "I'm the one they all go for, specially those young black rappers" says the highest paid lady companion of the group.

Transgender fights, name calling, bipolar breakdowns and carnivorism; this show is sure to leave you ROTFL (Rolling On The Floor Laughing for you non-texters). Beverly's play is interactive, fun, funny, jaw dropping and scandalous. There are no lines that aren't crossed and no shame in a little "real talk." Ms. Bonner is a true artist and director. She knows what she wants and how to make a heck of a production with an amazing cast of great actors.

Actress and comedian Beverly Bonner has appeared in films, stage productions and television.  In addition to her role as Casey in the “Basket Case” series, Ms. Bonner has appeared in more than 45 stage plays, most notably featured in the long running “Women Behind Bars” with the late actor Divine.   Ms. Bonner wrote, produced and directed “The Beverly Bonner Show” and “Beverly Bonner’s Laugh Track” for television which ran in New York, Los Angeles and Detroit for many years.  She recently celebrated a year long run of her play “The Gloria Glitter Show” also at the Broadway Comedy Club.

Tickets for the show are $15 in advance at SmartTix.com and $20 at the door.  There is a two drink minimum at the venue, and features a special “Casey” drink, Double Shot of Vodka, Orange Juice, Cranberry Juice and a splash of Club Soda. 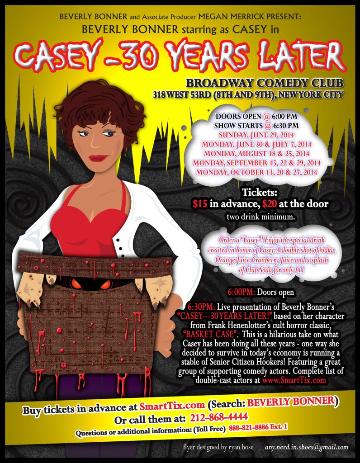