This event will be held at the famous SOS Club right in the heart of the city.  We will be showcasing some of Modesto's up and coming boxers, as well as other popular boxers from around the area.

In our headliner we have two local standout amateurs who will make their professional debuts against each other.  Victor Torres (of the Modesto PAL Boxing Gym) will be facing off against Michael Galaxio (of Modesto's BadtotheBonez Boxing Club) in a super bantamweight bout that is sure to live up to its top billing!

Also on the card, we have a super flyweight bout featuring Modesto's Gilberto Mendoza, a very tough boxer going up against Don Jose from Stockton in a cross town rivalry that's sure to bring in many people from both cities to cheer their hometown fighters on.

Sacramento's Darren Mallard will be facing off against Nathaniel Richardson of Madera in a Junior Middleweight bout, and hot prospect Marcos Hernandez from Fresno will be going up against William Walters of Sacramento.

We also have some other surprises, so be sure to get your tickets now so you don't miss out on this great night of professional prizefighting!

General Admission tickets on sale for $20 prior to the day of the event.

Ringside Seating tickets on sale for $50 prior to the day of the event.  $60 at the door. 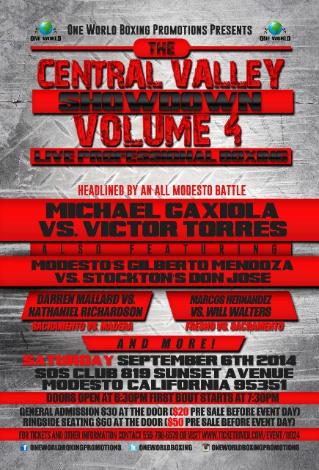