"American Smoothie" is a new musical comedy by Nick Jester and David von Kampen.  The show centers around Brian, a mild-mannered IT guy who works at the corporate office of a smoothie company.  Brian is forced to take huge risks in order to find his purpose in a story that blends love, redemption, and commerce into one hilarious musical.  The show features a cast of Lincoln's rising talents and veteran performers alike, and is directed by Nick Jester and Jesse Debolt, with Kat Palagi Stage Managing. This full length production makes it's world premier right here at the Haymarket Theatre August 13th, 14th, and 15th at 7:30pm.  Doors open at 7:00pm and Tickets are $8 for students and $10 for non-students.  Click on the ticket icon below to order presale tickets to this fresh new musical comedy now! 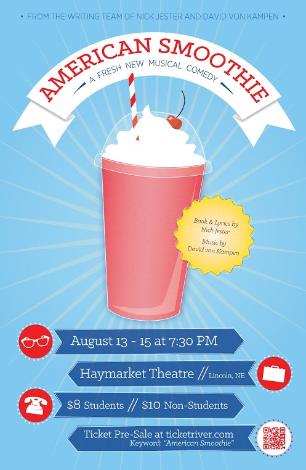