An Evening With Bob Smiley

An Evening with Bob Smiley

As seen with Tim Hawkins, a member of the RockShow Comedy Tour, Millions of youtube views,National touring comedian Bob Smiley is coming to CrossRoads Church in Jackson, MO. As a novice jokester, Smiley honed his talents as the merch-managing MC for bands like Newsboys, Third Day, and Mercy Me. This exposure, along with the fact that his act had the word "booger" in it three times, led to a swarm of goatee'd youth leaders begging Smiley to come entertain their sugar-high kid herds. He was forced to match their manic energy and soon developed a machine gun approach to comedy. Sixteen years later, Bob is now one of the nation's most in-demand and hilarious clean comedians. And he absolutely loves his job, no matter how many times his father challenges its legitimacy as a career choice. 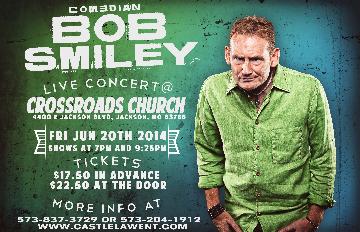