This event will feature Vintage Base Ball teams from 1860’s, 1870’s and 1880’s era's. Those attending will love seeing how the rules of the game have evolved during the last 40 years of the 19th Century.  This festival will also celebrate the accomplishments of George Bradley, a native of Reading, PA, who threw the first no-hitter in MLB history on July 15, 1876 when his St. Louis Brown Stockings defeated the Hartford Dark Blues 2-0. 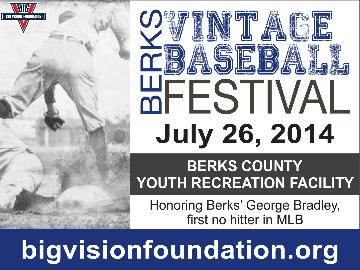