Every once in a while comes along an act that stands out from the rest. Talented performers that make the stage come alive and the audiences follow them wherever they go. Bob Andre and Frank Cirell got together in 1974 and have performed in, Las Vegas, Atlantic City, Cruise ships and more. They were voted Best Comedy Act in Atlantic City three years in a row. They haven’t been together for over thirty years for nothing. They’re on par with the greatest comedy teams of all time. One thing is certain though, their impressions are dead on, and the laughs never stop. 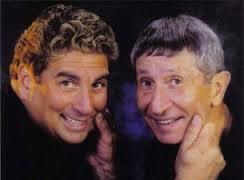